Digital Debate: Do Birds Have Thumbs? 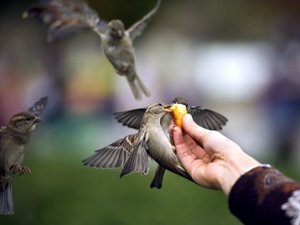 It is the kind of question that keeps biologists up at night: from an evolutionary standpoint, is the innermost digit of a bird's three-pronged wing more like a thumb or an index finger?

A study published online Sunday by Nature says it's a bit of both.

The stem cells in birds that normally produce the first digit die off during early stages of embryonic development, it found, while cells programmed to manufacture the index unit give rise instead to a thumb-like appendage.

Member No. 2, in other words, has undergone a shift in digital identity.

All four-legged animals with backbones -- vertebrates -- share an ancient template of five digits per limb. But that has not kept evolution from generating a numerically diverse menagerie for grasping, clawing and walking.

Human and primate hands and feet normally have five fingers or toes each; birds have three in their wings and two, three or four digits on their feet; two-toed sloths speak for themselves.

Snakes shed their limbs entirely, while Pandas have five clawed fingers and a sixth bigtoe-like appendage, the better to grasp bamboo stalks while dining.

In general, it is easier to lose a trait through evolution than to gain one.

Fuelled by conflicting evidence, debate has flourished for more than a century as to whether the tripart scaffolding of a bird wing corresponds to the thumb, index and middle finger, or to the index, middle and ring fingers.

Clues derived from the study of embryo development, however, suggested the "two-three-four" scenario was more likely.

They showed that the first digits of chick wings and feet both arise from the same genetic coding, but that, in the wing, the digit develops from the position in the embryo normally reserved for the index.

"We used a new technology called transcriptome sequencing. It has been around for a few years and we happened to be first to use it for this question," Wagner said by email.

The study also uncovered a new mystery: a lack of correspondence, or homology, between the other two digits buried in the bird wing and those found in the foot.

In biology, homology is a fundamental similarity -- across species or, in this case, within the same organism -- based on common descent or developmental origin.

"We want to find out how they acquired a unique identity," Wagner said.