'Koi! Who Goes There?' Fishy Spate of Robberies Rocks Flanders 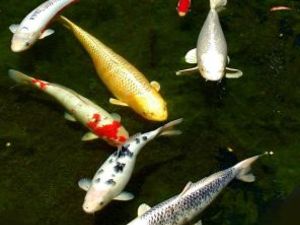 Police in Belgium admit they are clueless as they hunt thieves targeting prized Japanese koi carp -- ornamental fish that sell for many thousands of Euros yet are practically un-insurable.

Champion Flemish growers with long and painful experience as victims fear ever-more costly security to protect these creatures -- beloved by wealthy Japanese and Asian fanatics -- that, left in peace, can live to 60 and eat their way to the size of a small pig.

"It's the financial crisis," Veerle Jakobs of Nippon Koi Garden, a Japanese-themed estate near Antwerp holding up to 6,000 fish in high season, told Agence France Presse from her site near one of Europe's biggest ports.

Traders have reported a sudden series of koi robberies in Flanders in recent weeks, and two separate police districts are collaborating on live investigations.

A source who could not be identified said Interpol has been called in.

But lost stock is only part of the story.

Those who have devoted their lives to raising these technicolor-dreamlike fish warn that the crimes -- and regular, but botched, raids they blame on economic hard times -- also pose a new threat to the carps' health.

There is at least a two-decade history of industrial espionage -- theft and poisoning by experienced, organized gangs is an accepted pitfall of the trade.

But local knowledge that Flanders is a center of excellence for decorative fish beloved by specialist collectors also provides a new motive -- and creates fresh challenges for owners.

"They took 50 fish from my tank, but I'll never see them again," Herman Belon told AFP after his koi were stolen this month in Sint Niklaas, in western Flanders.

He reckons they are already on display in Japanese restaurants that won't know where they came from. The flesh is considered too dry to eat, but the manager of the high-end La Table Du Dragon in Brussels, who has at least 60 koi on display, was shocked when AFP told him about the robberies.

Millions of eggs produce fish sorted by Japanese breeders within weeks, and again, like champion studs, at two-years-old.

The very best, judged for their aesthetic qualities, acquire significant value as display items. Among aficionados, koi are considered moving works of art akin to a Picasso, with the world-record price being 350,000 Euros ($500,000).

The biggest dealers in Flanders know how Belon, whom they characterize as an amateur collector, feels.

"They've stolen my fish here before, and poisoned my ponds -- criminal gangs working to order," said Jakobs. "But now I think it's just someone who wants a luxury product but doesn't have the money."

She said the thefts "usually happened in the run-up to a big trade show."

"Once we found our koi at a show one year later. Every fish is individual -- but when the police compared the photos, they said the black stripe wasn't the same size so they couldn't do anything!

"You never get anything back," Jakobs sighed. "You can't insure the fish unless at a massive premium, one third of their value. Materials, equipment, staff, yes -- but not the fish themselves."

Lloyds of London confirmed to AFP that there are only a select few policies on the market.

One is a priceless 37-year-old European Jumbo champion Chagoi 103 centimeters long (more than 40 inches). The other, under heavy security, already sold for 50,000 Euros ($72,000) to a Brussels millionaire, she said.

"My father-in-law had a heart attack and died when we discovered the second robbery. They got one year in jail and were out in six months.

"It's been going on all through the 20 years I've been here," she said.

Van Alboom has invested in state-of-the-art laser alarm systems, and twice a day braves a nightmare chamber of flies and excrement to make sure an underground water purification system keeps working.

She and her sons are now suspicious of visitors, and calls the thieves "opportunist". "People still want luxury items, but they can't pay for them as easily now," she said.

"When I bring mine back from Japan, it's a two-day journey, very stressful," she said. "I leave them in quarantine for 40 days. Sometimes they lie on the bottom of the pond looking dead for up to a week, and don't even eat."

The thieves carry only bin bags full of water, "no oxygen".

"They pull out the first one with a big net on a long pole -- so the others are terrified. Stress releases poison, and causes real damage to their long-term health," she explained. "This crime is particularly cruel."

Its animal welfare foundation has offered advice for ornamental fish keepers, and a spokeswoman detailed recommendations on water quality, plant proximity and diet, as well as diseases from skin lesions to protruding scales.

They worry that the uninitiated may be tempted to release damaged koi into the wild -- "illegal, and dangerous for the environment."

In the beautiful city of Dendermonde near Ghent, deputy district attorney Jurgen Coppens told AFP he is treating Belon's case seriously and said koi thieves could risk "five to 10 years in jail".

"There is another case also being investigated in the next precinct," he said, unable to confirm any direct link.

"We haven't any leads," he admitted, "but the minute value is stolen, we don't care if it's fish, jewelry or a grand piano."