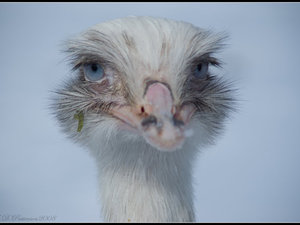 An albino ostrich was on the run in Russia's far east on Monday after escaping from a circus, as residents were warned not to approach the "very aggressive" bird.

Two ostriches escaped from the Anastasia travelling circus in the port city of Petropavlovsk-Kamchatsky when a worker left their cage open, but one was recaptured Monday morning.

"We have still not managed to find the second ostrich, a very rare albino," circus manager Vasily Kolos told the Interfax news agency.

The circus contacted local media asking residents to report the whereabouts of the bird, which can run at a speed of up to 70 kilometers (43 miles) per hour, Kolos said.

But the circus manager warned residents not to approach the bird to try to catch it. "The ostrich is a very stupid and aggressive bird, it can seriously injure a person."