Google Doodles a Playful Mix of Art and Technology 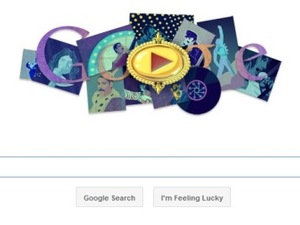 A tribute to legendary Queen front man Freddie Mercury took center stage at Google in much of the world on Monday in the latest "doodle" merging technology and art to show the Internet giant's human side.

An animated video crafted into the logo on Google's search page to honor what would have been the late rock legend's 65th birthday marked the latest step in the evolution of doodles that started as rudimentary clip art.

Google users woke to Mercury everywhere but in the United States, where a Labor Day holiday prompted the doodle to be bumped to Tuesday.

"It has a lot of fun, goofy stuff to celebrate what an incredible song writer, fashion icon, and musical innovator he was," doodle team creative lead Ryan Germick told Agence France Presse during a visit to their base at Google's headquarters in the California city of Mountain View.

"Freddy Mercury was an awesome performer, an ambitious creator and pioneered really audacious concept records," Germick said. "We just love him; we've been blasting Queen for the last couple of months and it is always joyful."

The first doodle was posted atop the logo at Google's famously uncluttered search page by company co-founders Larry Page and Serge Brin in 1998 when Google was just getting off the ground.

It was essentially an "Out of Office" note in the form of a Burning Man image from a gathering that Brin and Page were heading to in the Black Rock Desert of Nevada.

Brin and Page posted the art to basically tell users "If the servers melt down we will be back in a couple of days -- we're out in the desert," according to Germick.

The notion of a doodle flourished on a Google campus rich with creativity and engineering brilliance. Before long, a couple of "Googlers" eclipsed doodle clip art with beautiful illustrations.

"It is a way to humanize the website," Germick said. "This is an opportunity to express to users that we are here, we are people, and we like the things you like."

After Germick joined the team it began tapping into new Internet technology to add interactivity. A doodle that was a playable Pac-Man videogame was such a hit that it was given its own Web page.

Along with Pac-Man, Hom helped create a Jules Verne animation that let people captain an animated submarine based on one of the French author's famous novels, and a playable virtual guitar tribute to Les Paul.

"The audio samples were recorded on a Les Paul guitar, and we chose notes that made it easy to play something good," Hom said.

"People were sharing songs and remixing them on YouTube," he said. "It was amazing how everyone had a little ownership of that doodle."

Custom-made video clips hosted at Google-owned YouTube have been incorporated in doodles including tributes to Mercury, the late Beatle John Lennon and acting legends Lucille Ball and Charlie Chaplin.

"For me, a doodle is an opportunity to make someone happy for 10 seconds," Hom said. "Someone starts the day learning about a person they didn't know, or gets to see what is possible on the Web in the browser today."

A doodle for sculptor Alexander Calder was a 3-D graphic of one of his trademark works of art that Google users could "move" with cursor strokes.

Controls for the Verne submarine were synched to "accelerometer" capabilities in new-generation laptops so people could navigate by tilting computers.

The doodle team is keen to begin incorporating social components in doodles as technology allows.

"We can draw a scene with code, which gives us a lot of opportunities to make the home page a little different for you or let you play with a friend," Hom said. "Social is definitely an area we are very excited about."

Ideas for doodles spring from sources ranging from suggestions by Google users to personal passions of Germick's team.

"We have a gigantic laundry list of people who have inspired us and things we are excited about celebrating," Germick said.

"I think the DNA of Google having fun is what birthed us," he said. "Besides the free food, another tremendous perk of being inside of Google is that fun, at the very top of the company, is a value."

Germick describes his team as a handful of artists with thousands of engineers at their disposal.

"We are in the middle between geeks and artists," Germick said. "When we are able to use our logo and infuse technology with art really magical things have happened."

While doodles last only a day at search pages, they have a permanent home online at google.com/logos.