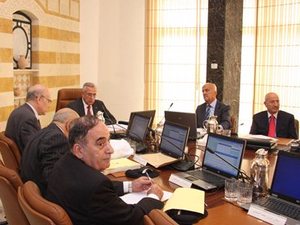 Prime Minister Najib Miqati has said that the cabinet made a very important achievement for the state and the citizen to gradually provide 24 hour electricity to the country.

In remarks to As Safir daily published Thursday, Miqati said: “The cabinet made a major achievement for the state and the citizen as it agreed on all the articles of the project.”

“Everyone came out (from the session) comfortable, particularly that the council of ministers will oversee (the implementation of) all the aspects of the project,” he said.

Asked if parliament would endorse it, the premier said: “The parliament is its own master. We will propose the project to the legislature and defend it in all its aspects.”

“We don’t mind if it (parliament) wants to add any logical information to any item,” he told As Safir.

“As long as we introduced all the necessary constraints, I don’t think that the MPs would have a big problem” with the project, he said.

How much is Bassil and Berri's cut in the deal? I think everyone in Lebanon should refuse to pay electricity, until those who are stealing it, start paying too! I don' t want to subsidize supporters of Killers!

if this will happen for real then all the mobs. who have generators & distribute what we know as "ishtirak" will soon run out of business

@xen.. yeah sure... do you believe it will work, I hope you're right, I grew on those people's lies, and i don't see this changing until we change them

SWEEEET!!! If this works out we could start stealing electricity uninterruptedly 24/7 and never pay anything because as stipulated in new the constitution "resistance saints are exempt from paying any bills and they can take anything their little hearts desire even if if does not belong to them sadaka allahou al 3azeem".
DSt

Lebanon really wants to know when the Shia will pay their share instead of stealing it and making everyone else pay their way.

Najib Miqati has a tweeter acount?? how can i find it?

for those who say "all politicians are the same", what you're witnessing here is a first; the BCR brought us Lebanese politicians that actually serve Lebanon, and not a Saudi mothership nor a western nation. You are witnessing decolonization, and even if logic was beaten out of your culture during centuries of colonization, you should be able to recognize that. If you can recognize nationalists from puppet politicians, your discerning powers are dangerously weak.