Williams Rules Out Israeli Attack, Says Syria Unrest Will Not Spill over into Lebanon 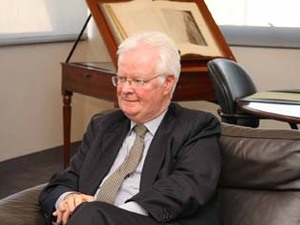 U.N. Special Coordinator for Lebanon Michael Williams ruled out and Israeli attack on Lebanon, noting that Lebanon is the only country around the world that its sovereignty is being violated on a daily basis.

Asked about the reasons preventing Lebanon and Israel from “ending combat” to achieve a “permanent ceasefire,” Williams said that the end of combats since 2006 was effective, however, achieving a permanent ceasefire faces many obstacles such as al-Ghajar village issue and Shebaa farms.

He added that the ongoing Israeli violation of the Lebanese airspace, and Hizbullah arms issue are other impediments that stop the two countries from achieving a permanent ceasefire.

Concerning the dispute over Ghajar, Williams reiterated that Israel’s withdrawal from the northern part of the occupied border village is nonnegotiable.

The official ruled out any Israeli attack on Lebanon, Williams said that during his last visit to Israel, former PM Ehud Olmert said that northern residents of Israel haven’t faced any problem with Hizbullah.

However, they fear the arms of Hizbullah, he said.

The diplomat said that he’s worried from the attacks targeting the United Nations Interim Force in Lebanon (UNIFIL), and the fact that no arrests have been made is alarming. Investigations didn’t reveal who were responsible and this is a major problem.

Asked if the attacks on UNIFIL are a tool to convey messages to some countries, Williams said that the peacekeepers deployment in the south is aimed at preserving peace and not like the foreign forces in Afghanistan.

Two roadside bomb attacks have hit the 12,000-strong UNIFIL force in the past four months while Israeli and Lebanese troops have opened fire at each other on the unofficial border that the peacekeepers are meant to police.

Williams stressed that the Syrian unrest will not affect Lebanon because Lebanon is a democratic country which makes it different from Syria although there are common backgrounds between the two countries.

NO they will be too busy bombing Syria and Iran.

lol shab...what a funny creature you are? why didn't your entity already bombed iran? after all iran nuclear crisis lasts for almost 10 years now.
that's enough time to make plans and preparations. your entity also got most modern airplanes from usa recently. so what's stopping you?