Bassil: Electricity Plan’s Approval is a Victory for Lebanon 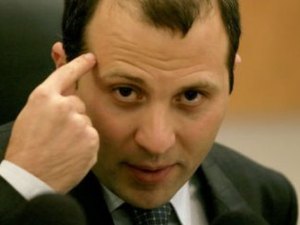 Energy Minister Jebran Bassil said the approval of the electricity project was not a victory for any party inside the cabinet but a victory for Lebanon and the government itself.

On Wednesday, the cabinet approved the electricity project proposed by him with several amendments including the allocation of the $1.2 billion funds in four installments, rather than in one payment.

“What happened is not a victory for the Free Patriotic Movement or any other team inside the cabinet. On the contrary, it expresses the victory of Lebanon and the government by respecting its policy statement that calls for a solution to the electricity crisis,” Bassil told An Nahar and As Safir newspapers.

Asked if the FPM had made major compromises for the consensual approval of the plan, Bassil said that from the start his party wanted to provide power to the citizens.

Now comes the role of the parliament to endorse the project, he said. “The consensus inside the cabinet was necessary to guarantee a majority support in the parliament as the opposition is ferociously seeking to topple the plan.”

what a crook you are and your relative Aoun

i am sorry, youssef, what do you mean with more destroyed and more broke. Who had the most profit of rebuilding beirut,,, not the pour nor the hard working men i geuss. So when the gov. wil provide all people of power at once, these pour and hard working people will also get it better. but you dont care offcourse because you can efford private suppliers. up to solve the water and internet connection. if doing so many western companies will come and open their HQ in beirut for the ME, just because of the climate and multi languall people. dont mind my english coz i didnt had the time to check it ;)

The backward mentality of some people in Lebanon will never allow this country to go forward. Who cares who proposes what. As long as there is accountability, and the decision taken will improve lives of people, who cares if it is the FPM, LF, PFP, or whatever. This is about the people not about political power.

this is a divine victory... they'll tell us next

First victory for the Lebanese since years! Bravo to the government and we look forward to the next one. This is the start of a new phase in rebuilding a real nation after years of false promises.

If I counted how many times 24h electricity has been promised since I visited Lebanon for the first time in '99. It should be here 72h a day by now!
Hope this time it actually turns out for the better of all Lebanese.

The last comment that I see on this story is the one (the first and only one so far) by GB and it shows 4 HOURS AGO. Naharnet seems to be just a lazy as their brothers and sisters on the losers, previously known as March 14. LAZY AND LOUD MOUTHS. al touyour 3ala ashkaliha taqa3ou

I'll be cautiously optimistic on this one. I'll give the government -and as much as I have doubts about the FPM's intentions- the benefit of doubt.

If we get 24/7 electricity, perfect. If not, then all pro march 8 supporters should accept that I and many others will be highly critical of the situation. Because there are NO EXCUSES this time. There is no blocking minority that you can blame such a scenario failing on...

PS: jabal amel, no im not a zionist working in the war department section. Go watch a " A beautiful Mind." im serious

Chapeau bas..Such performance will lead the opposition to....Vanishing....
Let us turn the light on and see the happy faces....Poor sectarian haters what are you going to do?
MrBrain

Is the assumption behind this "unusual" plan, which goes around the normal ministry channels, that the entire government is corrupt and not to be trusted?