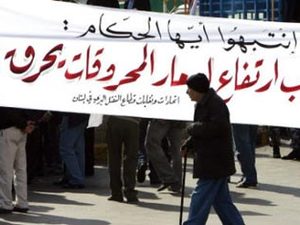 Public transportation drivers held a strike on Wednesday to protest the government’s alleged negligence of their demands.

President of the Syndicate of Taxi Drivers and Public Transport Workers Marwan Fayad told Voice of Lebanon radio (93.3) “the transportation sector strike is to express the rights (of the public transportation drivers) to achieve their demands.”

“This step is among other steps that will be announced later on to protest the government’s negligence of their demands,” he stressed.

The strike was accompanied by a heavy security deployment.

The unions are demanding that a drivers’ subsidy agreement achieved in May between ex-Finance Minister Raya al-Hassan and driver union chiefs be implemented in order to help them deal with rises in fuel price.

The transportation sector has continuously staged general strikes to protest the soaring fuel prices and demand a price cap on surging gasoline prices.

Energy Minister Jebran Bassil had delayed the release of the fuel prices many times during the tenure of the last cabinet after a dispute with al-Hassan over how to resolve the rises in gasoline prices.

Bassil proposed tax cuts on the prices, after cutting 5,000 L.L. several months ago, but al-Hassan refused this measure because of the impact the cut would have on the treasury’s revenues.

Labor and trade unions have repeatedly petitioned the government to eliminate all taxes and fees on gasoline prices.

Predictable, even we knew about it like couple of months ago... Next is school teachers, labor party... The days of Rizk and his labor strikes should prevail again...
You Journalists should promote open ended strikes too... you yourself are not paid well ;)... i am not blaming your bosses, i expect them to join you in this... That would really have an indirect impact and boost the Syrian revolution so they feel they are not alone in this, what do you think?
Antoon Saade made some sense when he describe the demographic similarity... but that's it, the rest is none sense :)
God bless you all

this goverment must work faster and must not make political question out of every problem.