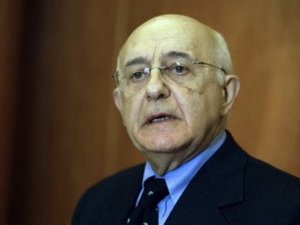 The President of the Special Tribunal for Lebanon, Judge Antonio Cassese, on Thursday issued an order convening the Trial Chamber for the first time in the case against the four suspects accused of being involved in the Rafik Hariri murder -- Mustafa Badreddine, Salim Ayyash, Hassan Aneissy and Assad Sabra.

“According to the Tribunal's rules, the Trial Chamber may meet before trial starts to engage in various matters, such as holding an initial appearance with the accused if one is in custody, deciding whether a trial in absentia is appropriate and ruling on preliminary motions,” the STL said in a press release.

The judges of the Trial Chamber are Judge Robert Roth of Switzerland, the Presiding Judge of the Chamber; Judge Micheline Braidi of Lebanon; Judge David Re of Australia; Judge Janet Nosworthy of Jamaica, an alternate judge; and Judge Walid Akoum of Lebanon, an alternate judge.

“According to the Tribunal's Statute and Rules, alternate Judges are present at each stage of the proceedings and may pose questions during hearings, but do not vote during deliberations. Alternate judges can replace Judges of the Trial Chamber should the voting judges be unable to continue sitting,” the STL added.

“Short biographic notes of the five judges are available on the Tribunal's website,” it said.

The Trial Chamber will convene as of September 20, 2011, Cassese said in his order.

Order on Composition of the Trial Chamber

They want divide the STL money (Lebanon funds $32 mio) among themselves.

this post didn't cause many comments and we see by that how irrelevant this story is.

As you gaze at your navel, the whole world will hear the case of how a bunch of criminal thugs, supported by the village idiot and his Clowns, committed murder. This is a very simple concept in modern world democracies, something I suppose is foreign to you being an Iranian/Syrian groupie. Only in a totalitarian/criminal mind is it acceptable to defend yourself by impugning a court... an international court at that.

This is happening like it or not. The consequences will be devastating for all who protect the gofer.

Justice will be served. Discard, ignore, mock, whatever serves your irrelevant agenda, but rest assured justice is coming