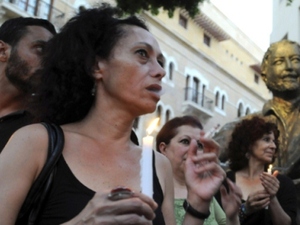 A number of Lebanese activists, journalists, intellectuals and politicians on Thursday staged a sit-in at the Samir Qassir Square in downtown Beirut in support for “the freedom and dignity of the Syrian people.”

Simultaneously, a group of supporters of Syrian President Bashar al-Assad, who belong to a number of Lebanese political parties, gathered outside the Beirut Municipality in the center of the capital, carrying Syrian flags and pictures of Assad and shouting slogans in support of the Syrian leader and his regime, state-run National News Agency reported.

Security forces deployed in the area prevented any clash between the rival rallies.

Speaking on behalf of the organizers of the pro-Syrian uprising rally, activist Saleh al-Mashnouq said: “We reject that Lebanon, the representative of Lebanese and Arabs at the U.N., be a real partner in the attack against the Syrian people.”

“Lebanon should rather be in its normal position, alongside the majority of Lebanese and Arab people who are opposed to the crimes against humanity being committed. A camp for Syrian refugees must also be set up in Lebanon, where they would feel secure and be treated according to the standards of human dignity,” Mashnouq added.

“We declare our full support for the demands of the Syrians who are seeking international protection for civilians by all means possible. We call on all the Arab leaders to take a historic decision and achieve this Syrian demand, and we also urge all human rights organizations concerned to stand by these refugees,” he went on to say.

lebanese should stop making protests for or anti assad regime. surely you must have a better things to do. stay home and sleep.

These protesters join the civilized world in demanding that Assad stop the butchering of innocent civilians. Unfortunately, the Lebanese Hezbollah government is on the side of evil, for which all Lebanese should be ashamed and will pay dearly.

This is funny! Some Lebanese people rally to call on NATO to bomb Syria to "protect" us Syrians, haha. Mad world we live in today.

Who would support Syrian regime other than drug dealers, terrorists and war criminals who protected by the regime the entire time

"Each time a man stands up for an ideal, or acts to improve the lot of others, or strikes out against injustice, he sends forth a tiny ripple of hope, and crossing each other from a million different centers of energy and daring those ripples build a current which can sweep down the mightiest walls of oppression and resistance." Robert F. Kennedy Cape Town South Africa 1966.

This is what the world misses from the current crop of world leaders. They lack vision. They lack backbone. They let mass murders like Assad survive and then they call the results "peace". God bless the martyrs of Syria and the people of Lebanon who want to live free. The world as it is today does not deserve them.

of course the zionist information war department had to say something. i guess they go on military court if they forget to leave their shit somewhere