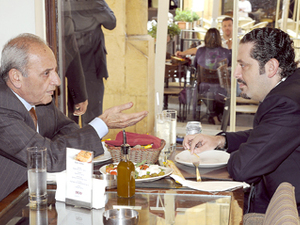 The political and verbal dispute between the Mustaqbal bloc and Speaker Nabih Berri has forced the intervention of religious authorities in an attempt ease the tensions between the two sides.

Concerned sources told the daily An Nahar in remarks published on Friday that the escalation could serve as another obstacle in the impending debate over the funding of the Special Tribunal for Lebanon.

The Higher Islamic Shiite Council said in a statement on Thursday: “The dispute has reached a new low verging on defamation against national, political, and spiritual principles, especially those of such esteemed figures as the parliament speaker.”

The head of the Loyalty to the Resistance bloc MP Mohammed Raad meanwhile launched a scathing attack against the Mustaqbal bloc, accusing it, its MPs, and media outlets of adopting a “repulsive rhetoric.”

“The depravity of this rhetoric has deliberately sought to destroy the last remaining bridge of communication between the Lebanese,” he said.

“The Mustaqbal bloc’s conduct is threatening to destroy any possible agreement between the Lebanese factions,” he added.

A prominent Mustaqbal sources meanwhile slammed the Higher Islamic Shiite Council and Raad’s statements, describing the latter’s position as “the pinnacle of political and intellectual terrorism.”

“Why did that create such an uproar? Why are March 8 camp outlets allowed release such cables while uproar is created when the Mustaqbal does the same?” it wondered.

“Hizbullah and the Higher Islamic Shiite Council’s statements are attempts to terrorize the media, cover up facts, and implement political terrorism,” it stressed.

“This is a sign that the others don’t accept the idea of equality, but they want to impose facts according to their views and this is the most dangerous threat the country is facing,” it noted.

The source warned: “The violent rhetoric may justify the use of other methods that Hizbullah had previously adopted.”

Al-Mustaqbal published on Monday a leaked U.S. Embassy cable saying that Berri had encouraged a military and a political strike against Hizbullah during the July 2006 war so that the Israeli aggression against Lebanon wouldn’t last long and so that the operation wouldn’t have any repercussions.

The Speaker later issued a statement denying the accusations.

Lebanon is broke and should not fund the STL especially that the STL is a farce and the real killers are my countrymen from the Mossad. I say this with a pain in my heart, but until when can we, Israelis, escape telling the truth as it is? The fact is that all of the decent Lebanese will eventually thank us, even worship us for ridding them of two filths in one operation, Rafiq Hariri and the Syrian occupation.

The so called Hibz and the Amal NAWAR are not used to democracy. They can't believe or comprehend that someone dares criticizes them...they believe they are above the rest of us and go crazy and panic (ya mama let me hold on to my rifle for some security) We all know that Berri is a low life crook, Hasan Nousralla is super duper high on power and Z general is nothing but a pathetic follower. You M8 idiots if you can't do the time don't do the crime, what a bunch of nawar hypocrites.

no they don't. they just don't like domestic traitors and zionists. i'm not really sure in what group are you in, but it's kinda same.

A drowning man often depletes his energy in vain....

Yea I agree with "sunni". Actually it's also like a dying star... first it swells and becomes a red giant expanding what's left of it's energy very quickly, then it goes out with a big supernova bang and leaves behind nothing but a little white dwarf...

Of course some can become dangerous black holes from which nothing, not even light can escape!

This is the what happens when the country is divided by Sectarian leaders...
MrBrain