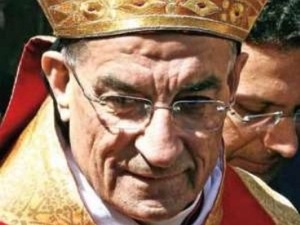 A number of March 14 MPs and officials on Friday criticized the latest stances voiced by Maronite Patriarch Beshara al-Rahi about the Syrian crisis and Hizbullah’s arms.

“To give or not to give Syrian President Bashar al-Assad a chance is something to be decided by the Syrian people, not anyone else,” Lebanese Forces bloc MP Antoine Zahra told MTV.

On Wednesday al-Rahi said “Assad must be given a chance because he is implementing reforms in Syria.”

Zahra also said the patriarch’s remarks on Hizbullah’s weapons “contradict with the principle of keenness on building the State and its authority, as liberating Lebanon and supporting the Palestinian rights should be done by the State, not by an armed party that is breaching the State’s jurisdiction and contesting its authority over the Lebanese territory.”

For his part, Zahra’s colleague in the LF bloc MP George Adwan told LBC television: “All of our sacrifices are for the sake of the rise of a strong State that should be in charge of liberating and defending Lebanese land and supporting the Palestinian right to return through its capabilities and international relations.”

“So we can’t now justify the rise of a mini-state outside state control and provide cover for the presence of weapons other than those of the army and security forces,” Adwan added.

“Approaching the issue of weapons in this manner undermines all the foundations of the Lebanese state,” Adwan noted, stressing that the LF will remain committed to “Bkirki’s historic principles” and that it will “always distinguish between its stance and its relation with Bkirki.”

Al-Rahi told Al-Arabiya television on Thursday that sectarian tensions between Sunnis and Shiites may emerge if the Syrian government is overthrown.

He warned that the Christians will pay the price if the Muslim Brotherhood succeeded Syrian President Assad.

Asked about Hizbullah’s arms, he responded: “The international community must pressure Israel to withdraw from the occupied Lebanese territories … and fulfill the Palestinians’ right of return, and consequently Hizbullah will have to lay down its arms.”

March 14 General-Secretariat Coordinator Fares Soaid told MTV that al-Rahi’s remarks “contradict with all of the church’s historic principles, especially that he took part in drafting the text of the Synod for the Middle East which only mentions the support of the State.”

“Linking the Palestinians’ arms to Hizbullah’s arms is usually something done by Syria’s allies in Lebanon, not the patriarch,” Soaid noted.

Meanwhile, Mustaqbal bloc MP Khaled al-Daher claimed that the Syrian president “has dispatched envoys to meet with al-Rahi in Lebanon in order to rally the support of Lebanese minorities for his regime.”

He accused the Syrian regime of “intimidating minorities in a bid to remain in power.”

Daher voiced surprise over the patriarch’s statements, saying they “contradict with the history of Christians and Bkirki, which has always supported freedom and stood by people and their rights.”

He also lamented “the remarks in which he (al-Rahi) called for giving a chance to the regime that has left no less than 3,000 people dead, according to the International Red Cross, and more than 70,000 jailed or missing.”

Al-Rahi’s stances “stem from fear of the practices of the (Syrian) regime, which has sent the minorities in Lebanon bloody messages containing a carrot-and-stick approach,” Daher charged.

Daher’s colleague in the Mustaqbal bloc, MP Nidal Tohme, for his part stressed “the need that Christians support the will of the neighboring peoples … and overcome the complex of the minority that is in constant need of protection,” noting that “a strong, just State is the solution.”

… and fulfill the Palestinians’ right of return, and consequently Hizbullah will have to lay down its arms.”

What? He's going further than Nasrallah even with this talk. So Hizballah will not lay down its arms till the Palestinians all return to their land? So basically, never. This man sounds like a pawn of the Syrians and Hizballah now.

New reading of what is not said, in light of what was said! "You know I am not totally or partially insane, yet what I just said in FRANCE is totally non sensical and totally off... Ok. so Basically , for me to say what I said and where I said it, it should be clear that it was for a reason, that is I had to say it under pressure.. so you intelligent European and the people of the Levant should understand how dangerous the situation is now, and stop fooling around with empty statments because it is time to act" .. this only for those who can hear and understand...

Proud To Be Lebanese (Guest) over 8 years

Remember what the Moufti of Lebanon said and did last month, remember how his own people boycotted his sermon, it is exactly what is happenning today with the Cardinal and his own people. One should ask himself:" maybe religious leaders are aware of things to come, that the politicians are ignoring or just not noticing!!!???? please think about it, it is more than just a coincidence.

Al Ra3y is dead wrong.
Justice and Righteousness are the constants on the side of which we should always be.
Although we might be surrounded by Extremists, to whom our liberty is offensive and to whom human rights are blasphemous, we should count on those from all sects who share our quest for freedom to bring true democracies to lebanon and its neighbors.

glorious patriarch attacked by a bunch of rabid dogs.

Wait until 10,000 are dead so that you give him a chance? deal with it now and immediately by stopping the bleeding...wrong message to the people.
Patriarch of Lebanon and not Palestinians, deal with the cancer now in the country that makes the militia raise their weapons and disallow ISF to enter their areas or collect the Electricity bills by robbing the Leb Government and the taxes that we pay versus deal with it later when the Palestinians return to Beirut and we fight them for 30 yrs with thousands of Lebanese young martyrs. Shame on this message and for the brave martyrs who sacrificed their life for our freedom. Do not speak politics anymore and regain the stolen lands of Lassa by working with your partner cheikh in Hizballah.

mfawaz: what you’ve just written is one of the most idiotic things I’ve ever read. At no point in your rambling, incoherent post were you ever close to anything that could be considered a rational thought. Everyone who had the misfortune of reading your post is now slightly dumber. May you rest in peace
(paraphrased from Billy Madision)

For decades all Lebanese factions don't want naturalization of Palestinians. It's funny when people say the word NEVER for the return of palestinians to their land when it is related to hezb. Ironic reality!

I listened to the speech of mgr rahi and it is unfortunate that it was taken out of context! He raised issues and it is true that Christians have been severely hit in irak. There are issues and only true mens can face them. I hope one man will stand up... Preferably not a billionaire!

On the comment for Bashar, I think if we are to treat people based on the last 30 years, many people in our parliament today could be considered as criminals. I guess when you have limited choice, you pick the best out of all worst choices!

So now that the follows your politics it is OK for the Patriach to be more than a spiritual figure and get involved in politics ?

Everyone who speaks the truth must face criticism, or rather gossip and empty accusations. But go ahead Sayyidna el batrak, and we will follow. Bravo M. RAHI........

I am sad to inform you that the mustaqbal party is at the end of its political life. No foolishness in the book was ever forgotten. they did everything they can for everyone to hate. you as mustaqbal stole from the people, bribed, were syrian puppies and coordinators, put unnecessary taxes, till the Lebanese cried out loud. Then you fought against the Syrian regime. That is the deadliest mistake ever. I don't know someone more foolish to do so. To fight Syria in Lebanon, this is HEROISM PURE. but to assist a Coupe in Syria from lebanon that is utter foolishness and total stupidity. When the dust will settle down, we will see the fate of this stupid movement called al-mustahbal

what if..... syria, hezbolah , march 8 ... are threatening and manipulating the patriarch into saying these things OR they would expose information they have on him (or his other colleagues) that would bring shame and embarrassment ( such as pictures, phone conversations, emails etc)

I guess it is a bit hypocritical of you to give lessons in Heroism. The debacle of Aoun in 1990 ended with his surrender and escape. Heroism would have dictated a different course of action. But it doesn't really matter now. The Syrian regime WILL fall. This is not wishful thinking. There is simply no other conceivable outcome. Prepare for another escape. France won't be welcoming this time around. Aoun's next escape will have to be to Iran.

Must not the patriarch consult with the council of bishops before saying things or traveling? Too much weight has been placed on these patriarchs.

because he is implementing reforms in Syria.? If this is refoms, then God help the Syrians when crackdowns against protests begins !