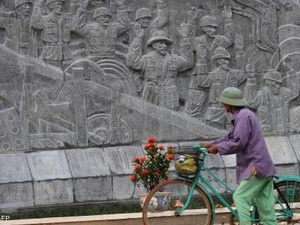 Tanks, artillery pieces and other relics of war are still scattered around the valley where Vietnamese forces won a decisive victory over the French at Dien Bien Phu nearly 60 years ago.

But a new battle -- to attract more visitors to the historic site and boost the impoverished region's earnings from tourism -- is tough going for the descendants of the triumphant troops.

Efforts to restore the weaponry and other reminders of combat are slowly attracting more travelers, helped by improved road access, according to local tourism officials.

Yet the remote area in northwestern Vietnam on the Lao border is still struggling to meet its goal of making tourism the leading industry in the province.

"Most of our clients, notably foreigners, have deplored the bad state of infrastructure and the quality of service here," said Tran Thu Nga, 47, who operates the small May Hong hotel in Dien Bien city, the provincial capital.

"We don't have as many geographic and logistical advantages as our colleagues" at the country's popular coastal beach resorts, she said.

Those who make the effort to reach Dien Bien Phu find that authorities have preserved many reminders of the 56-day battle, which ended on May 7, 1954 and was the critical event in Vietnam's emergence as an independent nation.

"This is one of the places where the wars in Indochina are clearly represented" with a full display of relics, visiting Australian David Smith said. "It was a decisive battle... makes for more of a landmark, I suppose."

The bearded lawyer said he stopped in Dien Bien city on his way to Laos from the better-known tourist destination of Sapa, and it was a shame that other Westerners on his bus just continued on.

One complaint is about the lack of English spoken in the historic locale -- unlike Vietnam's bigger cities or resorts.

"It was difficult to get a menu last night," Smith said.

Signs at the war relics are only in Vietnamese, not English or French, which is rarely spoken in the country these days.

Vietnam's National Tourism Administration has acknowledged that service standards need to be improved in the country, which saw five million visitors last year, a figure far below Thailand and other neighbors.

The battle at Dien Bien Phu saw the forces of legendary General Vo Nguyen Giap -- who marked his 100th birthday on August 25 -- haul artillery through the jungle to pound the French led by Colonel Christian de Castries, whose dank, dimly-lit four-room command bunker has been partially restored.

Much more of the original command site is to be re-created in future, said local tourism official Doan Van Chi.

The battle led to the collapse of France's colonial empire but cost thousands of lives on both sides.

A network of trenches has been re-created on Hill A-1 -- known as "Eliane" to the French -- where some of the most brutal fighting took place.

Soaked in blood during the battle, the site is now a peaceful and park-like memorial in Dien Bien's city centre.

It looks out towards row after row of identical headstones in the distant cemetery for Vietnamese fighters who died.

Near de Castries' bunker, a white obelisk in a peaceful garden commemorates French casualties. Unlike other Dien Bien Phu monuments, this was a private initiative by a Foreign Legionnaire who fought in the battle

Chi says Dien Bien wants to draw not only history buffs but also eco-tourists who can enjoy its natural attractions, as well as people looking to experience local ethnic culture with a homestay.

Most of Dien Bien's 500,000 residents are ethnic Thai and Hmong.

Although there are two flights a day from Hanoi, travellers usually arrive by road and as the route has improved, more are coming, Chi said.

"Even just three years ago, part of the road was still very bad," he said. The winding journey from Hanoi still takes about 11 hours.

Despite its isolation and other challenges, Chi says tourist numbers to the province have "grown remarkably", from more than 70,000 in 2000 to 300,000 last year, although not all visit the war relics.

That figure included 50,000 foreigners -- mostly from France -- about one percent of Vietnam's total number of overseas visitors.

"The number of tourists to our province keeps increasing over the past few years because in 2002 the government approved the project to preserve the relics," Chi said.

The problem, he added, is that tourists don't stay long or spend enough.

Tourism ranks as the number-two earner for the province, whose economy was estimated at 1.8 trillion dong ($85 million) in 2009.

"It is our target to turn tourism into the key sector for economic development," he said.

Dien Bien is working with other provinces to woo tourists and recently a team visited northern Laos, where the World Heritage site of Luang Prabang is a major draw, to look at ways of boosting travel between the two regions.

"I know the provincial officials have made a lot of effort but we still need several years to transform Dien Bien into a real tourist zone," said Nga, the hotel owner.

At the 50th anniversary of Vietnam's Dien Bien Phu victory seven years ago, the authorities inaugurated a grandiose North Korean-style monument that overlooks the city.

Parts of it are now crumbling and six former officials were jailed this year for corruption over the sub-standard construction.

For Dutch tourist Kim Van Denengel, 23, and her Belgian companion Fien Hiel, 22, the monument offered a scenic place to read a book on their brief, incidental stopover.

"We passed through from Laos to Sapa," Van Denengel said, illustrating the challenge in making the area a destination in itself. "We didn't just come for Dien Bien Phu."