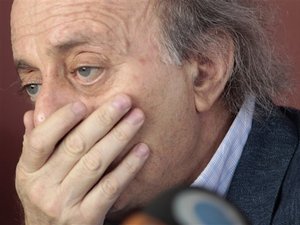 Progressive Socialist Party leader MP Walid Jumblat reiterated his support for the funding of the Special Tribunal for Lebanon, stressing that Hizbullah can prove its innocence in the assassination of former Prime Minister Rafik Hariri.

He told As Safir newspaper in remarks published on Saturday: “I support its funding especially since a significant number of Lebanese believe that the international court can uncover the truth in the assassination.”

He justified his support by saying: “The international community is expecting the establishment of the tribunal and it is waiting for any Lebanese slipup.”

“I am worried that it would impose sanctions on Lebanon should we fail to fund the STL,” added the MP.

“I therefore believe that it is necessary to fund it, considering that Hizbullah chief Sayyed Hassan Nasrallah has presented very valuable evidence to the investigation,” Jumblat concluded.

Meanwhile, the daily Al-Liwaa reported the PSP leader as saying that regardless of the political disputes in Lebanon over the STL, the government is “incapable of refusing to implement international decisions, most notably those linked to the tribunal.”

He had informed his visitors the need for Lebanon to commit to funding the court, even if its supporters represent a minority in the current government, implying that the funding still enjoys the support of a majority of MPs.

Al-Liwaa interpreted this as an indication that Jumblat’s National Struggle Front MPs still back the tribunal.

The STL has released arrest warrants against four Hizbullah members, accusing them of being involved in Hariri’s murder.

The party has repeatedly announced that it will not cooperate with the tribunal, deeming it an American-Israeli product aimed at destroying it.

A dispute has recently arisen in Lebanon on whether the March 8-dominant government would commit to funding the tribunal.

It is only a matter of time before walid switches sides and starts cussing the monkey of damascus once more. Aoun can learn from this fox how to play proper politics to stay alive

Haha, good joke, hand over your saints, and fight in the court of law.

the foxes are outclassed by walid beik,
he is waiting by the side of the river.....

The credibility of the international tribunal cannot be impugned by those who have none.

I say force the rat out of his underground house and let him face the court and tell them how his video is the truth, and all the rest of the evidence points to Israel. But if he is proven a liar........let him also face the punishment. I think we all know the truth already.

yes they can. why would they? because some cia mossad and saudi idiots want them to?

jabal amel
how does this work, do the cia mossad tell the idiots of the cia mossad infested hizballah when they want something done or do they leave them the to do lists on yellow post it notes?

ye3ni what do you expect the guilty to say?? "yes we are guilty" ! have you ever heard of a convict in a murder case of this magnitude to just repent and say "yes i am guilty, take me to jail" , those idiots in the cattle of nasralah believe any TIBIN he throws on them from a tv plasma screen, i do not even think that nasralah has full control on his gang. Does Iran really have to tell nasralah "hey we are planning to kill hariri"? ...but to big dig and all the other conspiracy believers... do you really believe that if israel actually killed hariri (not to mention all the others) that an STL would have been formed in the first place??? think..a little.. before you eat TIBIN...do you really think that hundreds of europeans involved in the investigations are ALL IN ON IT?? do you really think that israel would try to kill may chedayk?? or kill Pierre in broad daylight? OR MAYBE YOU ARE FULL OF SHIT AND YOU WANT US ALL KILLED AND YOU KNOW DAM WELL WHO THE REAL KILLERS ARE.

Hizbullah IS INNOCENT. The real killers are none other than the Israelis with the cooperation of their bitches, the US. Thanks to the stupidity and immaturity of cheikh Imbecile that Israel, once again, gets away with murder, his father's murder. In any case, the Israelis are to be thanked from the bottoms of our hearts for ridding the Lebanese of two filths, the bigger filth Khanzeer Rafic and the much lesser filth-in-comparison, the Syrian occupation.

Jumblat will change his mind in few days..it's a waste to listen to this guy but he is politically brave because he learned from his Dad lesson.

Harriri had a deal with the CIA for South Lebanon to be the home of the Palestinians to create peace in the entire middle east, Syria/Hizballah/Iran eliminated him and the rest of the anti-syrian politicians after this subject was discussed with Bashar and the latter hit Harriri in is palace in Damascus during the discussion.

there are people who are proud of HA killing hariri..they dont care about lebanese politicians dead, as long as they oppose them

guess thats the difference between me, most of M14 supporters..i would never accept that aoun or nasrallah be killed..i hate them yet i want justice for everyone..herein lies the difference my friends..these people do not want to build a country with us, they wanna build it on our heads..and theyre not ashamed of sayin it in public between themselves

when you read a comment saying: god bless the killers of hariri, what are you supposed to think..that these people want to live with you

i only wish they get their own part of lebanon, see if they dare launch an attack against israel cause they will be wiped off the earth..and no sunnis and christians to run to this time

No they can't. Hizb Mossad will not hand over the four Zionists whom killed several Lebanese

Anyone who wants to support the STL joke is welcome to do so personally. But our government has to take the money from every Lebanese to fund a joke, and this is not acceptable. We are broke. I repeat: WE ARE BROOOOOOOOOOOOKE. Let Jumblat and mini-khanzeer shell the money from their own filthy pockets with money they stole from us and from robbing the coffers. I personally have no problem with that. You care, you pay, and get off my back. 30+ years are enough already. LEAVE ME ALONE.