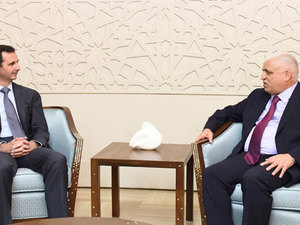 Syria's President Bashar al-Assad said Tuesday that any campaign against "terrorism" must start with pressure on countries that support armed groups in Syria and Iraq.

"The battle against terrorism starts with pressure on the countries that support and finance terrorist groups in Syria and Iraq and pretend that they want to fight against terrorism," state news agency SANA quoted Assad as saying.

Damascus characterizes all those seeking Assad's ouster as "terrorists" and accuses countries backing the Syrian uprising, including the United States, Qatar, Saudi Arabia and Turkey, of financing and arming them.

The remarks came as Assad met in Damascus with Iraq's National Security Adviser Falah al-Fayadh, who updated him "on efforts by the Iraqi government to confront terrorism," SANA said.

The international community is ramping up efforts to confront the jihadist Islamic State group in Iraq and Syria, with Washington assembling a coalition of regional and international allies.

But while Washington has said it could carry out strikes on Syrian territory, it has ruled out cooperating with Assad's regime against IS, much to the chagrin of the government in Damascus.

SANA said both Assad and Fayadh reiterated "the importance of cooperation between the two countries in the fight against terrorism".

U.S. forces are already carrying air strikes against IS in Iraqi territory, and its senior military officer said Tuesday that Washington would consider sending U.S. military advisers to the country on a "case-by-case basis".