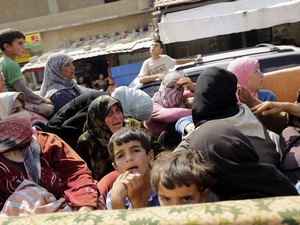 In many parts of the country, it is no longer unusual to see posters prohibiting "foreigners" -- understood to mean Syrians -- from being outside after 8:00 pm.

And both Lebanese and Syrians report witnessing harsh treatment of Syrians or even attacks against them, including by municipal guards who at times enforce the curfews.

Human Rights Watch, a New-York based group, has identified at least 45 municipalities in the country that have imposed curfews on Syrian refugees.

In a new report on Friday it called for an end to practices "that feed into a climate of discrimination against and stereotyping of Syrians in Lebanon."

Even before the flood of war refugees, Syrian workers in Lebanon were often treated with a mixture of condescension or mistrust, in part a legacy of resentment over Syria's 30-year military presence in Lebanon.

But the situation has deteriorated since the beginning of the conflict in 2011, with more than a million refugees flooding into Lebanon, which is profoundly divided between those who back President Bashar Assad and those who support the uprising against him.

The influx has placed new pressure on already scare resources, and created resentment against Syrians in some places.

Some Lebanese justify the measures taken against Syrians, accusing refugees of crime, and urging them to "go home".

"There must be limits for Syrians," one local official in the Mount Lebanon region said.

"They take jobs from the Lebanese. It's not that bad if we teach them a lesson now and again," he said.

Online, such sentiments are expressed even more freely, with one Facebook user insisting "We must chase every suspect Syrian out of the country."

And public figures have even claimed Syrians are creating traffic jams in Lebanon, despite the fact that the country's highways were snarled with cars for years before the Syrian war began.

But many Lebanese are appalled by such comments.

Lara, a 25-year-old civil servant, told Agence France Presse she was "shocked" to see police beating a Syrian man and asking why he was out at 9:00 pm in the town of Jounieh.

She intervened and shouted at the police and "they stopped beating him and ordered him to go home."

She is angered by hearing fellow Lebanese justify such incidents, or tell her they can recognize a Syrian by the way they dress, implying their clothes are cheap and tattered.

"It's the height of racism," she said.

Richard Choueifati, an entrepreneur, described how a Syrian man working for him was stopped by police as he tried to move house in northern Lebanon.

The police opened his suitcases, threw his belongings into the streets, then told him to pick them up and go back home.

"The next day I drove him in my own car so he could move his things," the 42-year-old said.

Activists point out that despite fears of a rising trend of discrimination, Lebanon has accepted an astonishing influx of refugees with relatively few incidents of violence.

The tiny country is currently hosting more than 1.1 million refugees, a figure equal to over a quarter of the country's population.

And many Lebanese have been eager to show they will continue to welcome Syrians.

Online, a Facebook page features pictures of supporters carrying signs reading "No to racism, no to hate, stop the curfews," or "Please excuse the racists among us".

And a sign hung from a bridge in Beirut reads "My Syrian brother, you are welcome in Lebanon".

According to Human Rights Watch, the imposition of curfews multiplied after Lebanese troops battled jihadists from Syria in the eastern Lebanese town of Arsal in August.

The clashes ended with some 30 security forces taken hostage, three of whom have since been executed.

But Nadim Houry, the group's deputy Middle East director, said "authorities have presented no evidence that curfews for Syrian refugees are necessary for public order or security in Lebanon."

"These curfews are just contributing to an increasingly hostile environment for Syrian refugees in the country."

Their country occupied and destroyed ours for 30 years, they lost all priviledges of being treated as "brothers" since then. Both our neighbors have aggressed us, both have occupied us, I dont understand why one (and in my opinion the worse one) is still seen as a friend.

you are really funny ...terrorist. Such a comment coming from you makes your statement so credible ... please keep going it makes me laugh !!!

Terrorist, you know every single person in here knows you are not Lebanese. You are not even human

Oho, you've never had a mother-in-law, have you?

By the way flamethrower, waynah Caroline?

No one begged the Syrians to enter Lebanon, thus they don't like our reactions to them, they are free to leave.

Curfews are in place to CURB robberies and rapes and murders committed by refugees who have no known address or file or photo in the country, therefore are not traceable by law enforcement. Curfews are not against "human rights", what about human rights to live in peace and without fear for our children?
if they have a problem with curfews, they can always go back to Syria.