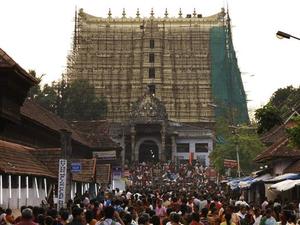 An Indian Supreme Court panel on Friday sharply criticized security surrounding a vast underground treasure trove found at a Hindu temple, saying it could be vulnerable to "tunneling attempts."

The staggering hoard of golden Hindu deities, precious stones and other treasures valued at up to $22 billion was unearthed in June in the vaults of the 16th-century temple in the southern coastal state of Kerala.

It is widely regarded as the largest discovery of its kind in India.

An expert panel set up by the Supreme Court to evaluate the treasure said security arrangements at the Sree Padmanabhaswamy temple, including the presence of armed commandos, were "high on promise and low on performance."

Unless steps are taken, the treasure is "susceptible to tunneling attempts," said the panel, who include a retired judge and representatives of the former Travancore royal family.

The temple, dedicated to the Hindu god Vishnu, was built by the king of Travancore and donations by devotees have been kept in its vaults ever since.

More than 50 security officers are positioned inside the temple and another 74 outside, the state government says.

Five of the vaults have been opened but the report by the Supreme Court panel said the final sixth sealed chamber, known as "vault B" -- a large space believed to contain even more treasure -- should remain closed until security is increased.

The court said it would decide next Wednesday on how to proceed with the unopened vault at the intricately carved temple, which been swarmed with visitors since the treasure's discovery.

One temple custodian has filed an affidavit with the Supreme Court, saying opening the space "could invite the wrath of the deity" and priests at the temple have also warned of dire repercussions.

Supreme Court Justice R. Ravendran said Thursday "impractical and superstitious suggestions" should have no place in the decision-making process.

The court had ordered an inventory of the vaults after a 70-year-old lawyer, T.P. Sundararajan, filed a petition saying the temple administrators were incapable of protecting its wealth.

Sundararajan died, reportedly of a stroke, soon after the first vaults were opened. His family dismissed local media suggestions that he had fallen victim to a "temple curse."

The Supreme Court is to decide the ultimate ownership of the treasure.

Some politicians have suggested selling off less important items like gold bars and investing the proceeds to generate income for social causes.

The head of the Travancore family, Marthanda Varma, has said the treasure "should be used judiciously for religious and social purposes" such as building hospitals.

But some senior Hindu figures and the state government say the treasure should remain at the temple.

"It is the wealth of the temple," V.S. Sivakumar, a senior leader of the Congress-led state government said.

Under Indian law, deities are permitted to "own" property, meaning the offerings made to the god could stay in the vaults.