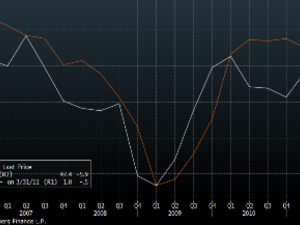 Deep austerity measures adopted by Italy this week are not enough to win market confidence according to economic experts who are calling for urgent action to boost growth.

The government hopes that its budget cuts and reforms will reassure markets about its public finances, and will also win approval from Moody's credit rating agency.

The agency warned in mid June that Italy's credit rating of Aa2 had been placed under review, and Moody's is expected to publish its decision over the next few days after studying both the austerity package and growth prospects.

A downgrading would be a warning shot for Italy, which has managed to avoid having its rating lowered since the start of the financial crisis.

Giuliano Noci, economics professor at the Politechnic University in Milan, said the 54.2 billion euros ($74.8 billion) austerity package -- the second in three months -- "will not be sufficient to calm markets."

The country's economy is trapped in a vicious circle with high taxes in the austerity plan threatening to hamper the recovery, he added.

Moreover, the aim behind the package -- to bring the country's budget into balance by 2013 -- is already obsolete, UniCredit economist Chiara Corsa said.

With reports that global growth is slowing casting gloom over the world economy, Italy's own growth forecasts are too "optimistic" and the country "will need further measures" if wants to meet its 2013 target, she added.

Investors are also asking themselves how committed Prime Minister Silvio Berlusconi is to implementing the measures, finding himself as he does at the center of yet another sex scandal, with popularity levels at an all-time low.

After weeks of dithering and procrastination before the government finally adopted the austerity package, "the markets want to know just how they will go about implementing the measures," Corsa said.

Rome is banking on 1.1 percent growth this year. But Italy's finance minister is likely to revise the figure next week, analysts predict -- particularly after Brussels lowered its forecast on Thursday to 0.7 percent.

Debates have sprung up over how to boost the country's sluggish growth.

"The problem should be tackled through shock therapy," economists from the Italian employers' federation, Confindustria, said Thursday.

Under increasing pressure, the government has said it will present a plan for growth before the end of September, with measures such as liberalization, simplifying bureaucracy and freeing up infrastructure on the cards.

But economists and business leaders doubt the government's drive.

"Everybody knows what it has to do but it doesn't have the political courage," Noci said. Priorities, he said, were the reform of the "fossilized" labor market and regulation of "bureaucracy which discourages investment."

As well as calls to relaunch growth, demands are increasing for the government to take act to reduce the country's vast public debt of 1,900 billion euros -- which is around 120 percent of the Gross Domestic Product.

A plan to reduce the debt by 400 billion euros and bring it down to 90 percent of the GDP by means of a tax on estate and privatizations -- the brainchild of Massimo Corsaro, a deputy in Berlusconi's party -- is gaining popularity.