Giacometti, The Last of The Etruscans? 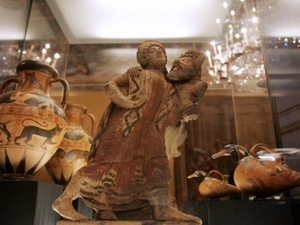 Alberto Giacometti's life-changing encounter with the ancient sculpture of the Etruscans is the starting point for a major Paris show that brings his art face to face with the works that inspired him.

More than 150 rare pieces by the Etruscans, a mysterious, seafaring civilization that ruled swathes of the Mediterranean until it was swallowed up by Rome in the first century BC, have made the trip from Italian museums for the show.

Alongside them stand some 30 works by the Swiss sculptor, gathered at the Pinacotheque from this week until January 8 for "Giacometti and the Etruscans," one of the top events on this year's European arts calendar.

Giacometti, who died in 1966, was long fascinated by the so-called primitive arts of the Aztecs, Maya and African civilization.

"But it was the meeting with Etruscan art and its elongated figures that brought about a real turning point in his work," explained Marc Restellini, the museum's artistic director and curator of the show.

The sculptor first discovered the Etruscans while visiting the Louvre's archaeology department, but he "had a revelation" after viewing a 1955 exhibition on the lost civilization, said Restellini.

Undertaking a journey to the former Etruscan lands -- in modern-day Tuscany in central Italy -- he came face to face with a figure known as "The Shadow of the Evening", an elongated bronze 57 centimeters long, dated to around 350-300 BC, in a museum near the city of Pisa.

Giacometti was left speechless before the statuette, which has never before left Italy and is viewed nowadays as the Etruscan "Mona Lisa," according the curator.

Seen side by side, there is a powerful kinship with the stretched lines of "Walking Man I", a powerful 1961 sculpture by the Swiss artist, as well as with his "Venice woman" series.

"It was a meeting of two worlds, two aesthetics, two philosophies. That is why we decided to bring the art of Giacometti and the Etruscans face to face," Restellini said.

"When it is genuinely justified, confronting the work of different artists takes history of art forwards," he argued. "And in this case, the confrontation with Etruscan art is essential to understanding Giacometti's work."

For the Italian Claudia Zevi, who co-curated the show, the light shed on Giacometti's work "is the only thing that can justify the effort of moving such exceptional, fragile works as the ones that have made the journey to Paris."

"I believe that Giacometti can be considered the last of the Etruscans. His work descends from the Etruscans, intellectually and artistically."

The show offers a "perspective on Giacometti's work that would not be available any other way," added the curator, who was moved to tears to see the works side by side at last.