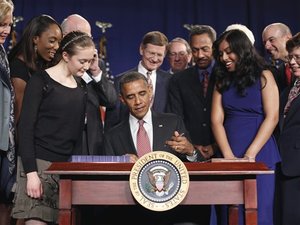 President Barack Obama signed into law Friday a major overhaul of the U.S. patent system, a measure designed to ease the way for inventors to bring their products to market. "We can't afford to drag our feet any longer," the president said.

Passed in a rare display of congressional bipartisanship, the America Invents Act is the first significant change in patent law since 1952. It has been hailed as a milestone that would spur innovation and create jobs.

The bill is meant to ensure that the patent office, now facing a backlog of 1.2 million pending patents, has the money to expedite the application process. It now takes an average of three years to get a patent approved. More than 700,000 applications have yet to be reviewed.

"Somewhere in that stack of applications could be the next technological breakthrough, the next miracle drug," Obama said. "We should be making it easier and faster to turn new ideas into jobs."

The president signed the bill after touring Thomas Jefferson High School for Science and Technology in Alexandria, where he examined students' work, including a wheelchair that responds to brain waves. Obama at one point had to step aside as he admired the technological displays. "I don't want to get run over by a robot," he said.

The law aims to streamline the patent process and reduce costly legal battles. It was backed by companies including Google and Apple as well as the U.S. Chamber of Commerce. Small-scale inventors are divided on the legislation, with some arguing that it gives an advantage to big corporations.

Obama was joined at the signing ceremony by Senate Judiciary Committee Chairman Patrick Leahy, a Vermont Democrat, and House Judiciary Chairman Lamar Smith, a Texas Republican, the two main sponsors of the legislation.