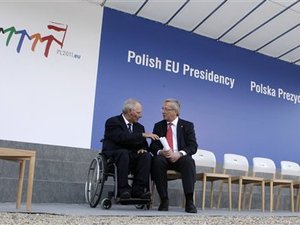 European Union finance ministers are debating a tax on financial transactions that could raise money for the EU as well as make banks share bailout burdens with taxpayers.

But European internal markets Commissioner Michel Barnier said after a meeting Saturday "there's no consensus" on the tax, which would take a tiny fraction from a wide range of financial dealings.

The levy could could be used to support the EU or be a way for banks to repay the costs of the massive government bailouts during the 2007-2009 financial crisis.

France and Germany support the idea but Britain is opposed because London is a major financial center. The U.S. is also opposed.

Many say the tax won't work unless imposed globally.