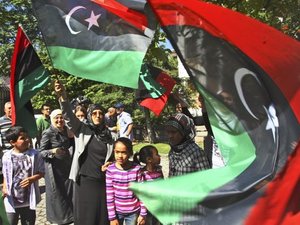 Turkey Saturday was parachuting in 22 tons of humanitarian aid to the Libyan city of Bani Walid, one of the last holdouts of fallen leader Moammar Gadhafi's supporters, the prime minister's office said.

Two military cargo planes left Ankara on Saturday to bring food to around 10,000 people in Bani Walid in need of urgent help, the office said in a statement on its website.

As there is no airport in the city, the aid packages would be dropped down by parachute, it added.

The National Transitional Council, Libya's new rulers, said its fighters had to make a "tactical withdrawal" from Bani Walid on Friday night as a result of sniper fire after earlier entering the oasis town.

Turkish Prime Minister Recep Tayyip Erdogan was on a visit to Arab Spring countries last week and he went to Tripoli on Friday and met with Libya's NTC leaders.