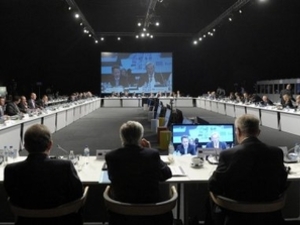 Europe is digging an ever-deeper hole as it vows to resolve the Eurozone crisis, experts said Sunday as Greece prepares for a pivotal week of international debt diplomacy.

Plagued by "parochialism, pettiness and procrastination," according to Sony Kapoor, head of the Re-define think tank, "kill the messenger seems to be the new strategy," he told Agence France Presse en route to New York and a frantic week at International Monetary Fund, World Bank and G20 gatherings.

"The otherwise fractious European Union leaders have united in their criticism of the markets, the IMF and now (U.S. Treasury Secretary) Tim Geithner for being honest about the scale of problems facing the Eurozone," Kapoor said.

"This does not bode well for the ability of EU leaders to respond to the big and urgent challenge posed by the unsustainable borrowing costs facing Italy," said the Eurozone's third economy.

European Central Bank chief Jean-Claude Trichet was more upbeat of the 17-nation Eurozone's debt situation, insisting that "taken as a whole, it is probably better than other major advanced economies."

The United States is in a far worse position, both in terms of its annual deficit and its runaway national debts.

Facing demands from guest Geithner to up funding for Eurozone rescue packages, Germany insisted that Washington would have to drop its opposition to a wished-for tax on financial transactions -- although that suggestion drew short shrift.

Trichet's remark was seen as a pointed rebuttal to implied criticism by Geithner, who warned during talks with EU counterparts in Wroclaw, Poland that "governments and central banks need to take out the catastrophic risk to markets."

In an eloquent put-down, Trichet said he didn't quite understand precisely, a tack echoed by former French foreign minister Michel Barnier who quipped that the EU could perhaps invite China's finance minister next time out.

The European Union adopted its defiant stand towards Geithner after delaying a decision on when to release blocked bailout loans for Greece.

Boston University's Vivien Schmidt, a longstanding expert on EU affairs, wondered whether ministers were "leaving time for commercial lenders to offload some more of their toxic holdings to the European Central Bank."

"They are simply "hoping that the BRICS -- and in particular China -- will come to the rescue of the PIIGS," she said.

The former groups Brazil, Russia, India, China and South Africa among the most promising global economies of the 21st century.

The latter refers to Portugal, Italy, Ireland, Greece and Spain, but as ever, says Schmidt, the solution lies closer to home.

The analysts agreed that metalized guarantees for Eurozone bonds would send a powerful signal to markets.

Merkel herself, though, "has categorically ruled that out, and the French have gone along," Kapoor added. "So until Merkel reverses her position, there can be no movement on that front either."