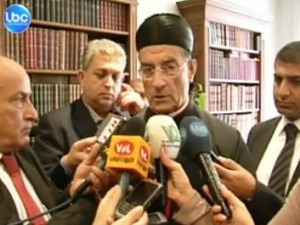 Washington has reportedly asked for explanations from Bkirki on Maronite Patriarch Beshara al-Rahi’s controversial statements on Hizbullah’s arms and Syria.

Ad-Diyar daily said Monday that al-Rahi’s stances would hinder meetings between him and top U.S. officials, including President Barack Obama and Secretary of State Hillary Clinton.

During his visit to Paris, al-Rahi linked the fate of Hizbullah’s weapons to the liberation of the remaining occupied Lebanese territories and expressed fear on the rise of the Muslim Brotherhood in Syria, saying the group could threaten the existence of Christians in the region.

He also called for giving Syrian President Bashar Assad the chance of reform. However, the patriarch later said that his statements were taken out of context.

Ad-Diyar also said that the Vatican has tasked the papal ambassador in Beirut with seeking clarifications from al-Rahi.

The patriarch’s visit to the Vatican on Oct. 1 to promote him to the rank of Cardinal could be postponed over the latest controversial statements, Ad-Diyar added.

During his visit to Baalbek on Sunday, al-Rahi expressed fear that the bloody events in some Arab countries would lead to civil wars and bring more extremist regimes to power.

screw the title of cardinal. his loyalty must be at home not in Vatican.
Actually, it was a mistake for Maronite church to accept Pope and Catholic Church, they are something special and should have remained totaly independant.

Oh how we miss you Patriarch Sfeir!!

monseigneur rahi, if u dont explain what do u mean by"out of context",
u will be out of context urself.
just explain urself clearly, ma testihi.

you don't even need to say that.

however he's gone....now the glorious patriarch Rahi is here

No surprise as the US administration & the Vatican belong to the same mafia, the one that puts its personal interest above any other consideration.

We support you all the way Father Al Rahi. Dont bow your head to anyone but GOD and dont allow politicians and politicized Vatican to change your path of goodness and what is in the interest of Lebanon. God Bless you.

Patriarch Beshara al-Rahi’s comments is a classical example of religious leaders sticking their nose in the dirty politics, whether its in Lebanon, Arab countries or anywhere else on this planets. As long as there is no separation of state and church, Lebanon and the rest of the Arab world will stay a light years behind the rest of the civilzed world. Historically, religious leaders, whether christians, moslems, oe hindus, are responsible for the bloodiest civil strifes and religious wars which killed more people than all wars combined. Its high time that they shut their big mouthes and focus on their "God" and "Prophets" than talking politics.

Jabal amel, it is not a mistake to be in communion with the bishop of Rome, who is the descendant of st. Peter, the first bishop of Rome. Jesus told Peter that "you are my rock, and on this rock I will build my church."

Do not believe these silly "news" articles. The patriarch and the Maronite church are very special in the eyes of the Vatican. If the batrak is made a cardinal, it will be something extremly unusual so quickly after becoming batrak, with past cardinals positions being granted after 4-10 years. There has never been two Lebanese cardinals, and usually it takes the death of the predecessor. The main job of the cardinal is really only to elect a new pope. The position of Patriarch of Antioch and all Maronites is much higher position than cardinal, and cardinal Sfeir answers to Batrak al-Rahi.

The Patriarch made a mistake of judgement and showed a degree of naivete with respect the Hezbollah's weapons. Even if Israel withdraws from the very few remaining kilometers of Lebanese land, the Iranian proxy would never give up its weapons. For without its weapons, Hezbollah will lose all of its power.

Wikileaks has shown that all Lebanese parties hate Hezbollah and are now pretending to side with it out of sheer fear.

ado:"There has never been two Lebanese cardinals..."
Cardinals Sayigh and M3ouchi were both Lebanese and Cardinals at the the same time .

Naharnet, please spare us these stories that are based on "reports" that anyone can fabricate and that nobody with a straight thinking mind believes anymore regardless of who the thinker/reader sides with. Only in Lebanon and other retarded countries do we still have media outlets that use such pathetic tricks of unsubstantiated "report." And assuming that this country or that country wants clarifications, what will this change especially regarding what someone like Patriarch Al Rahi said? This honorable man does not seek power, money or other gains from anyone. He cares about the Christians and he cares about Lebanon. So get off his case and defend him against the interference in our internal affairs by any country, be it your friend or foe. This is the honorable stance that every decent Lebanese should take. GET OFF HIS CASE AND DEFEND HIM.

To the idiots on here who are pro-batrak-statements. I am sorry to tell you that your B, who is not a politician and should not be one, have uttered very dangerous things that could actually put his faith followers in direct confrontation with the vast majority of the Arab muslims, precisely what he is claiming he wants to avoid: first, by openly supporting a terrorist organization accused by the world community of assasinating a very prominent muslim leader/politician, second by supporting a terrorist Syrian regime murdering and torturing tens of thousands of muslims. The region might well be on its way to chaos for few years until things settle down, and during this chaos it would very wise to be on the side of the oppressed not the oppressors!!, The pope himself openly condemned the Syrian regime atrocities. The B should either take the side of the people in Syria or play smart politics (since he insists) and NOT TAKE SIDES AT ALL. Victims do not forget/forgive easily.

realist, excellent comments and I agree with you.

What business does washington have in what a lebanese patriach says? Mind your own business, your not God, when will you realize it?. USA is nothing but a jewish occupied land. There is nothing christian about it, your entire media and politics serve israel while over 45 million christian americans are starving so that european jews can fill up their swimming pools that they have built on land stolen from the Palestinians. Batrak Rahi should never have said what he said but the last entity to condemn it is washington who supports all the opressive arab regimes, including that of bashar el asad. Iraqi christians were fine before the US decided to "liberate" the iraqis at the cost of hundreds of thousands dead, millions starving and millions becoming refugees only to end up with another opressive regime. The threat to oriental christians comes from the jews who operate openly as well as secretly and under disguise.

To hell with the Vatican and the Pope! Instead of supporting one of their own who is only seeking to protect the Christian population in the Middle East and being the voice in the wilderness who speaks the truth. Instead they support the hypocritical West, which behave like whores laying with their pimps, the Moslem Brotherhood (as if they expect to gain from the relationship). Apparently, we did not learn our lesson well enough from September 11TH and whether we can trust the Saudi's and their ilk.

He is the Patriarch without the gratuitous title of cardinal handed to him by Rome. Is the Pope a leader of Christians of a pawn of the West? I would bet all my money on the latter.

Sayidna, continue to speak the truth and protecting your people!!!!!!!!

Point is, Maronites are only a few million in the world, and to have two cardinals representing such a small community (most cardinals represent average over 10 million) would mean a very big, unprecedented endorsement by the Vatican, of batrak al Rahi. I agree with bigdig. This is the view of the Vatican, especially after the Sunni extremist attacks on christains in Iraq.

i just feel bad for him " it was a rookie move" and now damn if he retrieves his comments ( adding more fuel to the fire )and damn if he keeps pushing his way( the heat is on) ....again he should keep the dirty talk to the dirty politicians and stick to only our christians views....

The Batrack is not stupid and knows well what he is talking about. Alas yes there are Islamist fanatics who's plan is to destroy the minorities in the Middle east. If he was not sure 100% he would not be so stupid and say a thing. the guy has far more knowledge than many of his followers. Watch egypt and the other arab countries very close now. Islamist extremists are working hard on taking over. If Bashar falls. The shiites Christians and druze will be massacred. any one who thinks not ought to think twice .

The Patriarch is an honorable and polite men. But I will spell out what he would tell the US: GO SCREW YOURSELVES.