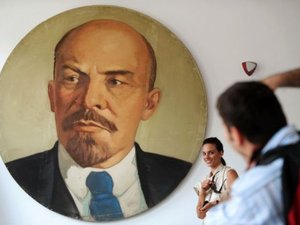 Twenty-two years after the fall of its communist regime, Bulgaria opened on Monday its first-ever museum of the state-sponsored, propaganda art characteristic of that era.

The Museum of Socialist Art in Sofia exhibits some 77 sculptures, 60 paintings and 25 smaller plastic art works created between 1945 and 1989 by the most renowned sculptors and painters of the time.

Other works glorify the life of the working classes and the feats of the partisan movement that brought communism to Bulgaria in 1944.

"It was high time to put that era where it belongs -- in a museum," Culture Minister Vezhdi Rashidov said at the opening.

Museum workers fished for the items in the collection "town by town, warehouse by warehouse, cellar by cellar, looking to save everything, which has not been melted," Rashidov said, expressing hopes that he would see the collection grow over the years.

They were largely removed after Zhivkov's ousting in 1989. Many were destroyed, others doomed to oblivion.

Displaying them, however, was expected to turn into "one of Sofia's biggest tourist attractions to both foreigners and younger Bulgarians, who did not live Communism," Finance Minister Simeon Djankov said.

"These are also masterful works, made by some of the finest Bulgarian artists of the time," Rashidov reminded, noting the purely artistic value of the collection.