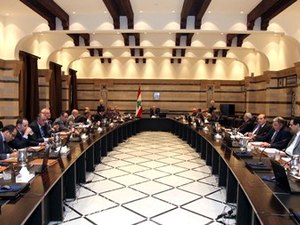 The cabinet on Monday approved the proposed borders of Lebanon’s Exclusive Economic Zone in the Mediterranean, a step that was postponed during the last session.

It added that the Israeli claim "infringes on Lebanon's Exclusive Economic Zone," a sea zone that gives a state the right to explore its maritime resources.

"This is a clear violation of Lebanon's rights ... over an area of some 860 square kilometers, and puts international peace and security at risk," it said, adding, "We urge the secretary general to take all necessary measures to avoid conflict."

Lebanon and Israel, which remain technically at war, locked horns over the maritime border after the discovery of potential offshore energy reserves.

The Israeli cabinet in July approved a map and submitted it to the United Nations, which has been asked to mediate the growing conflict.

The Israeli map conflicts with Lebanon's proposed borders, which give the Jewish state less territorial waters and was submitted to the United Nations last year.

Lebanon argues its map is in line with an armistice accord drawn up in 1949, an agreement which is not contested by Israel.

Israel has for months been moving to develop several large offshore natural gas fields in the eastern Mediterranean, some of which are shared with Cyprus.

With 41 items on its agenda, the cabinet convened at the Grand Serail under Prime Minister Najib Miqati.

Miqati held talks with representatives from the land transportation syndicate and public drivers Monday morning at the Grand Serail to discuss the implementation of a deal that was agreed upon last week.

Last week, the drivers’ union suspended its nationwide strike after reaching a deal with Miqati.

The strike was aimed at protesting the government’s failure to deliver on a monthly LL400,000 fuel subsidy promised in May.

The Hezz never let previous governments engage in indirect negotiations. Now they created a crisis and are engaging the Israelis. The Cypriots and Irraelis are already drilling whil the Hezz have caused Lebanon to fall behind again. This is no victory for the government, only a money grab by the Hezz.

Iran will never drill this gas.

The conflict with israel is the raison D'etre of hezbollah. Normally, any issue , large or small , is exploited by Hezbollah in order to maintain the fire under the conflict burning.
A party that needs an enemy to survive is holding the fate of all the lebanese in its hands while some of them applaud? If there were any stupidity olympics they will win all the golds.

I wish they were so prompt to demarcate borders with the shakika, who as usual is the queen of empty gift boxes (rather loaded boxes!) ! LOL.

if it wasnt for the Hez your country would be smaller. the Hez doesnt need any excuses as long as israel is still occupying lebanese land. all lebanese politicians including ure beloved gea gea agrees on the oil issue , so from what genius are you deriving your incredibly smart theories?
you have had your chance and look where it has brought us. what has the harriri govt done ? 2011 and we still have power outages even Ethiopia(no offense) has 24/7 electricity. we have no decent public transportation system , water cuts, insanely high phone prices, shall i go on? you are a FAIL
time for a reboot.. no place for sissys like you. btw i used to support hariri.

Hezz is in an imaginary state of mind & trying to brainwashing the rest of Lebanon according to their & Iran's agenda. What's wrong with having peace with Israel? Even the PLO & Hammas are doing it. Sit down with them & we will solve all issues in matter of days. Hezz is preventing peace in Lebanon & robing the young Lebanese from a better future, while Israel laughs at our stagnation. It is not true that Lebanon would be smaller if it wasn't from Hezz. Actually, Lebanon is smaller on the international stage today, because of Hezbollah.