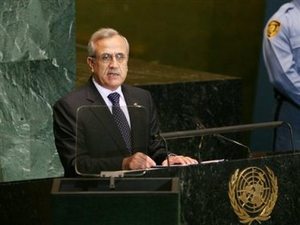 President Michel Suleiman has put Israel’s infringement on 870 kilometers of Lebanese waters at the top of the agenda of his talks with world leaders in New York, including U.N. chief Ban Ki-moon, Lebanese diplomatic sources said.

Suleiman is in New York to participate in the annual General Assembly meeting. He is scheduled to attend a Security Council session on Libya on Tuesday and address the Assembly the next day.

On Thursday, Suleiman will chair a Security Council session on preventive diplomacy that Lebanon has called for as the Council’s president for this month.

The president will discuss with World and Arab leaders the implementation of Security Council resolution 1701 and daily Israeli violations of Lebanese airspace, the sources told several Beirut dailies.

But the Jewish state’s infringement on 870 kilometers of Lebanese waters in its Exclusive Economic Zone will be at the top of his agenda. The area includes a large reserve of oil and gas but Lebanon is claiming it and accuses Israel of aggression after its cabinet approved the map of maritime borders that includes the area.

In retaliation, Premier Najib Miqati’s government agreed on Monday on the line of demarcation for Lebanon’s Exclusive Economic Zone, which is a sea zone that gives a state the right to explore its maritime resources.

Upon his arrival to New York, Suleiman met with members of his delegation to put the final touches on his participation in the General Assembly meeting and the Security Council sessions that Lebanon will chair till the end of September.

The Hezz made sure they were in power to negotiate with their friends and behind the scenes partners the Israelis.

His speech will be read to an empty chairs assembly. It's a copy-paste from the Lahoud days except for the oil story. If I were him, i would solemnmy ask the UN for the following:
- demarcation of borders with Syrian
- condemnation of the evil syrian regime for crimes agaisnt humanity, which were incidentally perpetrated against Lebanese under the buzz of the civil war they were feeding.
-the full enforcement (and not the empty support When it is violated daily by arms shipments to Hizbollah, and the refusal of Lebanon of any help in the fields of surveillance and border controls)of the 1701 resolutions and 1757 and their enforcement under chapter VII. In this respect consider arms seized lately by Turkey on its way from Iran to Hizbollah as a breach of sovereignty, and a blatent violation of resolution 1701!

Due to the extent of the Exclusive Economic Zone (extends to 320 KM off shore ) disputes always arise between nations concerning their demarcation. For example if natural gas is discovered between Cyprus and Lebanon the two nations will have to divide the outcome.
These disputes are solved diplomatically and not by fiery speeches and rocket arsenals.
Other nations do not seem so eager to start wars that might destroy a lot more than what the dispute is about.
In Lebanon the politicians' empty posturing has turned the country into a ridiculed rogue nation at the image of Hezbollah's master , Iran.

the file of oil and gaz was in the parliament ages ago and then suddenly it disapeared from the parliament in the nineties ?!!!!
lebanese gaz lebanese oil is the right for all lebanese and a responsible goverment should open this dossier and start exploiting ressources and stop begging arab rich countries for help

Yossi Haddad... Of course you are commenting on this article, it involves your beloved Israel. If it is that simple, than there would be no dispute. Lebanon has already agreed with Cyprus. But Israel is claiming indisputable Lebanese economic zone that the US and U.N. Have agreed is Lebanons. Take any point and whomever's land shore line is closest claims the rights to the economic zone. Your country is trying to steal hundreds of sq. Kilometres of Lebanon's oil.

Empty posturing and fiery speeches like the ones being made by your country because the Palestinians are only asking for the same recognition, from the same international body that created Israel? If anyone has perfected the art of fiery speeches and war mongering over small disputes (providing medical aid and terrorist materials like school books, concrete and diesel)... It's your country, Israel.