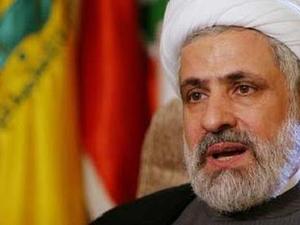 Hizbullah deputy leader Sheikh Naim Qassem accused the March 14 forces on Tuesday of acting in a way that serves the U.S.-Israeli project.

“I don’t like to mention much what the March 14 group is doing as a conspiracy,” Qassem told Iran’s Fars news agency. “But it acts in a way that whether willingly or unwillingly serves the Israeli-American project.”

The March 14-led opposition should be aware that all parties should join forces to consolidate the state “or else we would defeat each other,” he said.

Asked about the situation in Syria, the Hizbullah deputy secretary-general told the agency that the Shiite party doesn’t interfere in the affairs of any country.

“Each country has its own conditions and circumstances,” he said, rejecting accusations that Hizbullah was participating in the confrontations between Syrian security forces and anti-regime protestors.

“This claim is false, unjust and untrue,” Qassem stressed.

And what is YOUR project exactly??

Anhilate Israel by all means? Get a life!

We do not care about Israel, we want a normal relation with them, like the Emirates, Jordan, Egypt, etc...

We are tired of being your trigger for useless wars and constant threats. You want to fight Israel, fight them alone and leave us out of it!

If the American plan is democracy and freedom in the Middle East, that's fine by me!

their project is a country similar to Iran.

Someone will have to explain to us how those defending the Israeli project, and dubbed to be israeli agants, could have been Israeli assassination targets in 2005 and after? So Israel was in fact assassinating its de facto allies! Even the weakest mentally, among the robot public of the Hizb , cannot buy that crap!

We Iranier are bloody tierd of beeing scared ov USA or Israeli bogy . We have no enemy far hated and worst than Khamene- ee and his corporation.
I am an Iranian. I am for the march 14 whom I concider real Lebbanonis patriot.. Sed this Molla to Iran!

Hezbollah serves Israel by being their "enemy", thereby justifying Israel's destruction of Lebanon every now and then.

If Hezbollah agreed to disarm in return for Shebaa, then we would be a happier country, but Hezbollah serves Israel by being Israel's "excuse" for destroying Lebanon.

Now, who is the real Israeli agent?

And what is your "Basij" Agenda Sheikh Qassem, turning Lebanon into a mini-iran ? Enough of your Resistance already, every True Lrbanese knows what you MURDERS, THIEVES, THUGS, CRIMNALS, MERCENARIES,
OUTLAWS... Are and have been doing for decades now in the name of the so called Resistance. At least March 14 align themselves with the civilized people in the world, unlike your "Basij Resistance" who is executing the orders of your Masters on Lebanon and it's innocent, law abiding Citizens. March 14 has not, and never will, commit any of the Crimes your RESISTANCE has been commiting, you are a resistance against PEACE in Lebanon. Why don't you start by paying your Electric bills and turning over all the Murders and Criminals you are protecting in HIZBUSTAN, and do us all a big favor by shutting up about all your lies.

Lebanon is blessed for having such diversity....one fact remains till date
1: Our politicians in Armani suits did not manage to liberate one inch of lebanese soil. They only added inches to their wastelines and millions to their bank accounts.
2: Lebanese friends like France, US, or whoever did not manage to liberate one inch either. They used Lebanon as a negotiating card with the regional forces of power.
3: Resistance and its brave men liberated most of lebanon in only 10 years of work and defeated the world's 3rd strongest army in another 6 years of preparation. (as per Israeli acknowledgement).
4: A single sect or party cannot eliminate the other in Lebanon...this is a fact and Shiaa Phobia is a campaign launched from Saudi so that the monarch's there maintain their positions. The Shiaa are a minority in the world compared to Sunni and 200 years of hyper production won't change that fact. Please use wikipedia.

this guy has irritating posture, but his honesty and willingess to say the truth is glorious

eat your hearts out

Always attacking the so called American - Israeli project.....
The chicken or the Egg story.
Now what is your project....it is easy to attack but let us show your project.
Please

You're the one serving Israel with your Iranian and Syrian allies. Since 30 years, Syria and Iran are living in peace, not a single stone thrown on the settlers occupying Golan. But of course, all wars should start from our poor country. From this land we want to liberate Shebaa, the golan, free Palestine, erase Israel, and maybe reconquer the Andalos, why not! and i forgot to mention that these fights should be done only by us, while the surrounding states are just spectators, delivering demagogic speeches to keep their followers stupid and blind. So enough. We don't want a new victory. Enough destroying our land. Go pay your electricity bills and stop stealing cars and lands. I have a financial problem: can i blow up a parking in Dahye as u did in Antelias?

it seems to me they know they are loosing ground both internally and externally, so all these comments, which are much of the same refrain, are just a prelude to convince their followers it was the sionists who defeated them :)

14 March...For Israel?!
Are you sure Reverend?
You reminded me of another Godfellow who said it 5 years b4 you :
A certain Bashar H.A who labelled 14 March as Israeli products
Undoubtedly you belong to the same loosers team...

I think Naharnet did a great favor for the lebanese youth....it gave us all a window to vent our frustration from the political struggle we were born, raised, and might very well die with...

To be able to drive change one needs to listen (and understand) the ideas, concerns, belief of others...are we doing that?

good one sheikh qassem of the zionist infested hezbollah qassems, we knows you are addressing your comment to the idiot twins jabal amel and mowaten to make them feel important and it works.

The Shia don't pay electricity so we are in big debt to Zionist bankers like the World Bank. Is it you Qassem who servesthe Israelis?

Pay you electricity bill and stop living like beggars.

Correct. I have nothing to say. I will answer your few posts based on facts and deformed by your imagination, not the ones that are irrelevant and so light that they dont deserve my attention. Sorry but your iraq analysis is ridiculous. Cheers!

Your Hezboshaitan hate is the problem and you are making Israel the big favour by helping them to upgade their weapon and raise more cash for their illusion war a including their radical views and anti-Lebanese policy.
The problem here is your radical hate is similar to the zionst and will bring more destruction to the region.

Your action service the Iranian and Syrian influence in the Lebanese affairs, Lebanon is not a stage for regional power war games, so you need to mind your own business.

Today, Hezbollah is confiscating land and digging trenches to install its own private communications network in the Bekaa. Bulldozers everywhere, acting without regard to private property or to the government. This is consolidating the state?

Only an Israeli project because Hezbollah operates in Lebanon exactly as the Zionist do in the West Bank.

Syria was kicked out of Lebanon in a smart way and we can do the same with Israel, unlike Hezboshaitan war helping to destroy Lebanon and kill Lebanese every day during the war and after.