Mustaqbal Blames Surge in Security Incidents on 'Culture of Arms' 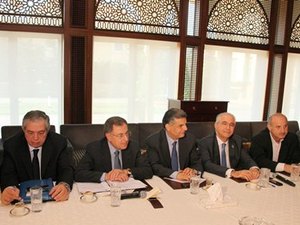 The Mustaqbal parliamentary bloc on Tuesday voiced concerns over “the recurrence of security incidents” in the country.

In a statement issued after its weekly meeting, the bloc said it discussed “the surge in security incidents, such as the latest atrocious crime against the peaceful family of Ali al-Hajj Dib in the Ras al-Nabaa area, and other daily incidents involving the use of firearms.”

“The bloc, which condemns and rejects this phenomenon, reiterates its warning against its growth and outbreak, given the fact that it is a dangerous phenomenon spreading rapidly in the Lebanese society,” the bloc said, blaming the surge in violence on “the spread of the culture of arms and gunmen … and the evasion of punishment generated by the ‘party of arms’.”

Mustaqbal highlighted “the recurrence of armed clashes and the use of weapons and force in regions dominated by this party (Hizbullah) more than any other region.”

Addressing the issue of the electricity plan proposed by Energy and Water Minister Jebran Bassil, the bloc said “any project involving the spending, investment and borrowing of such huge amounts of money cannot be approved without clear, universally recognized rules and regulations, as the issue is not personal or political, but rather national, professional, technical and financial par excellence.”

The bloc also condemned “the recurrence of shooting incidents and the violation of Lebanon’s northern and eastern borders by the Syrian security forces,” urging the Lebanese security and military forces to “boost their deployment on the border in order to confront breaches and protect Lebanese citizens.”

The Bloc is 100% correct. The Lebanese and All Arabs should not have arms, Only the Israelis should be armed.

Anyone who makes excuses for militant thugs, from any sect or political party, to carry guns wants a country of chaos and violence. PERIOD. As long as there are militias and weapons all over the country there will never be peace and Lebanon will never make progress.

I apologize in advance if my comment offends any Lebanese patriot, but this is the most stupid thing I have ever heard!
Both camps keep on picking on silly stuff to agitate fanatic emotions, through meetings, conferences, media they own & every possible aspect, & only Lebanon is at loss in the end. You folks don't see it, but if we keep doing this we will end up getting the same war that tore our country into pieces in the last century! Is it a phase that lebanon has to go through every few 10 years to keep the economy & our lives as low as possible?! look at them, all of our esteemed politicians, they are tycoons owning tens of companies that give them millions in return, they practice politics as entertainment when they're bored
I am afraid, & I hope I am wrong, that one day we will read about these days as the reasons another civil war ignited in lebanon. I was watching Aljazeera's 7arb Lobnan last month & I couldn't help it but notice how history is repeating itself. wake up people

Can those gentlemen explain the correlation between arms, religion and security!???!!
This collective statement is a pure insult to any average Joe..Conveying this low level of analysis shows the hypocrisy and disrespect of those gentlemen by tweaking reality to suit their political aim…
My two cents
MrBrain

Soup to Nuts (Guest) over 8 years

These pathetic losers play it stupid and insult every decent Lebanese because they assume that the decent Lebanese are as dumb and such retards as their followers. YES THEIR FOLLOWERS ARE DUMB. Hey, dumb followers, just ask these farts who funds Fath al Islam? Who funds Jund al Cham? Who funds Hariri's Al Qaeda - Akkar and Tripoli Brigades? WHO, IDIOTS? WHO? DUMB RETARDS.

Guns are so old-school. Whatever happened to fighting with bare fists? Lebanese have become to shi shi nya nya for that?

since i did my job well into disclosing the filthy zionist militia information war department spreading it's slime over the an nahar comments section, they don't even hide anymore.

You think yehuda was sarcastic? this is what zionists really think. there is no sarcasm. just fear of our glorious resistance.