Al-Rahi, Ignatius IV: Only a Just State Can Protect Everyone 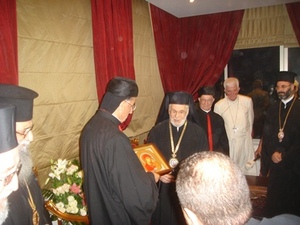 Only a state built upon justice and equality is capable of protecting all of its citizens, Maronite Patriarch Beshara al-Rahi and Ignatius IV Hazim, Greek Orthodox Patriarch of Antioch and All the East, said Tuesday.

In a joint statement issued after a closed-door meeting and a dinner banquet at the HQ of the Greek Orthodox patriarchate in Balamand, the two Christian leaders also “stressed their rejection of the notion of ‘protection’ for any group, from whichever side it may come.”

Al-Rahi and Ignatius IV also stressed “the need for serious efforts aimed at achieving fruitful brotherly cooperation” between the two churches, underlining “the importance of Christian-Muslim solidarity concerning the national and humanitarian affairs.”

According to the statement, the two patriarchs “discussed the general situations in the countries of the Arab Orient and noted that Christians consider the state – the state of citizenship and equal rights and duties – as the real guarantee for a prosperous and promising future, where everyone would live in freedom and dignity, away from any religious or sectarian discrimination.”

Al-Rahi and Ignatius IV agreed on “the importance of raising the Christian voice at international forums in support of the just and rightful national and Arab causes, especially the Palestinian cause.”

The two also stressed “the significance of dialogue at the national level in order to realize social justice and decent living for the citizens of our Levantine countries and dispel the ghost of sedition and civil and sectarian strife.”

The joint statement comes after remarks by Ignatius IV that embattled Syrian President Bashar al-Assad is “an honest person who is working for reform” and a series of controversial statements by al-Rahi in France, where he called for giving Assad a chance to implement reforms.

Al-Rahi has said that his statements in France on the Syrian crisis and Hizbullah’s arms -- which stirred a storm of controversy in Lebanon – were not interpreted in a proper manner.

And he told Al-Arabiya television that sectarian tensions between Sunnis and Shiites may emerge if the Syrian government is overthrown.

He warned that the Christians will pay the price if the Muslim Brotherhood succeeded Assad.

Asked about Hizbullah’s arms, he responded: “The international community must pressure Israel to withdraw from the occupied Lebanese territories … and fulfill the Palestinians’ right of return, and consequently Hizbullah will have to lay down its arms.”

Herein are stated the reality and the hope for the states that we should strive to create for the welfare of all.

"...But do not follow their example. 4 Their words are bold but their deeds are few. They bind up heavy loads, hard to carry, to lay on other men’s shoulders, while they themselves will not lift a finger to budge them. 5 All their works are performed to be seen. They widen their phylacteries and wear huge tassels. 6 They are fond of places of honor at banquets and the front seats in synagogues, 7 of marks of respect in public and of being called ‘Rabbi.’ ..." Matthew: 23: 4-7

You are quick to quote scripture without even knowing His Beatitude, Patriarch IGNATIUS IV of Antioch and all the East. If you did, you would know he is a holy man who has been serving the Church since his childhood and i without blemish as much as any man can be. For example, while others were busy destroying Lebanon during the civil war, he was building the Balamand University, now one of the premier universities in Lebanon and the entire Middle East. He has helped the Orthodox Church to grow in Syria and Lebanon and is highly respected by peoples of all faiths.