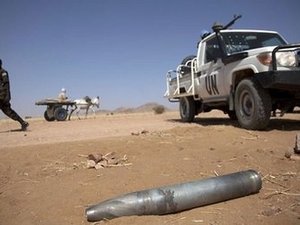 The Sudanese army has attacked a heavily armed convoy of Darfur rebels near the war-torn region's border with Libya, killing one and seizing a truck load of weapons, the army spokesman said on Tuesday.

The rebels were traveling in two big vehicles, one full of fuel and the other full of weapons, that they had hijacked in Libya, Saad said.

Both vehicles were destroyed and the JEM troops fled, leaving one dead comrade behind, he added.

The rebel movement could not immediately be reached for comment.

JEM spokesman Gibril Adam warned earlier this month that the governments of Chad and Sudan were planning a joint attack on its positions, after a Chadian army officer claimed 100 rebel vehicles and weapons supplied by Libya crossed the Chad border.

Adam denied that such large numbers had returned from Libya, but confirmed to AFP last week that the group's leader, Khalil Ibrahim, was back in Darfur, after he was expelled from Chad in May 2010 and sought refuge in Tripoli.

At least 300,000 people have been killed and 1.7 million people remain displaced since the Darfur conflict first erupted in 2003 between non-Arab rebels and the Arab-dominated Khartoum regime, the United Nations says.