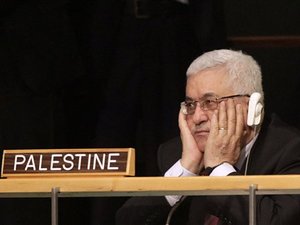 U.S. President Barack Obama stressed Wednesday there is no "short cut" to peace between Israel and the Palestinians as he sought to head off a showdown over a Palestinian bid for full U.N. membership.

Addressing the U.N. General Assembly, Obama made the Middle East conflict the center point of his speech before he was due to hold crucial meetings with Israeli Prime Minister Benjamin Netanyahu and Palestinian President Mahmoud Abbas on the diplomatic conflict.

The United States has threatened to veto any Palestinian application to the U.N. Security Council seeking backing for state membership, insisting that only direct negotiations can produce a permanent deal.

"I am convinced that there is no short cut to the end of a conflict that has endured for decades," Obama told the U.N. General Assembly's annual debate.

"Peace will not come through statements and resolutions at the U.N. -- if it were that easy, it would have been accomplished by now," he said.

"Ultimately, it is Israelis and Palestinians -- not us -- who must reach agreement on the issues that divide them: on borders and security; on refugees and Jerusalem."

Abbas has said he will make an application to U.N. Secretary General Ban Ki-moon on Friday after his speech to the U.N. gathering. The Palestinians say they are acting out of frustration with the failure of efforts to set up a state.

For Obama, the confrontation is an embarrassment as 12 months ago he stood at the U.N. assembly and called for Palestinian membership of the United Nations within a year.

"I believed then -- and I believe now -- that the Palestinian people deserve a state of their own," Obama said. But he added Israel must also have cast-iron security guarantees.

"Let's be honest: Israel is surrounded by neighbors that have waged repeated wars against it. Israel's citizens have been killed by rockets fired at their houses and suicide bombs on their buses," the U.S. leader said.

Israel "looks out at a world where leaders of much larger nations threaten to wipe it off of the map," he added.

Obama was to meet Netanyahu after his speech and Abbas later in the day amid frantic efforts by many world leaders to head off a U.S. veto at the Security Council that some fear could spark a new Middle East crisis.

Opening the U.N. summit, Ban said: "In the Middle East, we must break the stalemate," and reinforced Obama's appeal for compromise.

"We have long agreed that Palestinians deserve a state. Israel needs security. Both want peace," the U.N. chief insisted.

U.S. and European diplomats appeared to be working to buy time to find a formula that would allow greater international recognition of a Palestinian state while forcing the two sides back to negotiations, frozen for the past 12 months.

Netanyahu arrived in New York renewing an offer of immediate talks with Abbas.

"We believe the Palestinian bid at the U.N. is a mistake and it will not advance peace nor advance the establishment of a real Palestinian state," Netanyahu's spokesman, Mark Regev, told Agence France Presse as the Israeli delegation arrived.

Obama has already called for negotiations to resume using the 1967 lines -- encompassing the occupied West Bank and the Gaza Strip -- as a starting point for the contours of an eventual Palestinian state. Although he did not mention them in his speech to the assembly.

If the Palestinian resolution does not get at least nine votes on the 15 member council, the motion would fail and no veto would be necessary.

"We don't know for sure what the vote count will be. But we know they're not going to get through," Susan Rice, the U.S. ambassador to the U.N., told American television, reaffirming the administration's resolve to block any resolution.

If the Security Council path fails, the Palestinians are expected to turn to the U.N. General Assembly for a strengthened observer status, similar to one given to the Vatican.

Tony Blair, the former British prime minister who is the special envoy of the Middle East Quartet -- the United States, Russia, European Union and United Nations -- was seeking to draw up a statement that would coax Israel and the Palestinians back to talks.

Yes, Uncle Tom Obama. The Arabs kill the poor innocent Zionist settlers and how was Palestine wiped off the map and its people ethnically cleansed? If Abbas and all Arab "leaders" have any dignity, they should ALL demand Israel be kicked out of the UN, call for a total boycott of Israel and Zionist occupied America.

sure there is....just bomb zionists for what they done on USS Liberty.

For once, I agree with Jabal amel!

After 60+ years how could he call this a short-cut? The path taken is one of the longest ever in mankind's history. Well, after hundreds years' war ...

Obama goes out of his way to make believe that he is in control of matters. This failed US president has proven to be worse than G.W. Bush, the dumbest president the US has ever had. The jerk BEGGED Israel more than once to SLOW DOWN the building of settlements, but the Israelis pushed him around, pushed his envoy into oblivion, and insulted him and his unqualified Secretary of State. Then the JERK begged the Palestinians to return to the negotiating table after stripping them of the last thing that they have, their dignity. Once again, Israel insulted the JERK. But the JERK wants to be re-elected next year, so he licks his wounds and immediately resumes kissing Israel's rear. GOOD LUCK, JERK. If this is not a formula for the fall of a great nation, someone please tell me what it is.