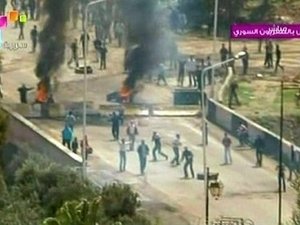 The latest bloodletting came as U.S. President Barack Obama called on the U.N. Security Council to impose sanctions on Syria in a speech at the General Assembly in New York.

And in Geneva the Office of the United Nations High Commissioner for Human Rights said the death toll from the regime's bloody crackdown on protesters since mid-March rose to more than 2,700 people.

The Syrian Observatory for Human Rights, quoting residents, said snipers shot dead a man in the Baba Amr neighborhood of the city of Homs and killed another in the town of Rastan, in the central province.

A man and a woman were also shot dead by security forces in the city of Homs, where a man died on Wednesday of his injuries, while a 24-year-old hit by a bullet bled to death in Talbisseh in the same province, it said.

Meanwhile, "security forces arrested three wounded people in a Homs hospital and took them to an unknown destination," the Observatory said.

And the body of a young man was found Wednesday in Al-Huweiz village, in Hama province further north, "days after he was arrested by security forces," it added.

The bodies of two other men were handed over to relatives Wednesday in the northwestern province of Idlib, where army and security troops have been conducting operations, it said.

And the elderly parents of prominent pianist Malek Jandali were beaten up by pro-regime militiamen because of "the sympathy shown by their son" for pro-democracy protests, the Syrian Human Rights Committee said Wednesday.

Jandali, 39, who was born in Germany but grew up in Homs, is an internationally known pianist and composer.

The latest U.N. estimates show that the death toll in Syria's crackdown on dissent has increased by over 100 to more than 2,700 people killed since mid-March, said human rights spokeswoman Ravina Shamdasani in Geneva.

"More than one hundred were reportedly killed in the week between the 12th and 19th of September," she said, adding that reports of killings continue to pour in.

Frustrated with the regime's failure to heed global calls to halt the bloodshed, the 27-member EU prepared to slap a 7th set of sanctions against Syria on Saturday, diplomats said.

The new sanctions will include a ban on investments in the oil sector and on delivering bank notes and coins made in Europe, and will also target six firms and two individuals "directly linked to the regime" who are part of Assad's "inner circle," one diplomat said.

Earlier this month, the EU adopted a ban on crude oil imports, designed to hit hard at Damascus as the EU buys 95 percent of Syria's oil exports, providing a third of the regime's hard currency earnings.

Saying there was no excuse for inaction when people were being “tortured” and “murdered” by their government, Obama called for formal U.N. sanctions on Syria over the bloody repression.

"For the sake of Syria -- and the peace and security of the world -- we must speak with one voice. Now is the time for the United Nations Security Council to sanction the Syrian regime, and to stand with the Syrian people," Obama told the U.N. General Assembly.

He was criticized heavily by political opponents within the United States for responding too slowly to the Syrian regime's crackdown on demonstrators.

In his speech at the U.N. General Assembly, the U.S. president, who last month called on the Syrian president to quit, said the world needs to back the Syrian people.

"As we meet here today, men, women and children are being tortured, detained and murdered by the Syrian regime," Obama said.

"The question for us is clear: Will we stand with the Syrian people, or with their oppressors?"

Gotta love how people, whom us Syrian have NEVER heard of, are "prominent". Even better, Obama wants to sanction us Syrians for the sake of "the peace and security of the world". Not even the "prominent" and "peaceful" Dabbee7 Abu Sha77a6a can write a more ridiculous plot line.

Give the Russians a deal so the killing stops and ASSad goes.

Give the Russians a deal so the killing stops and ASSad goes.