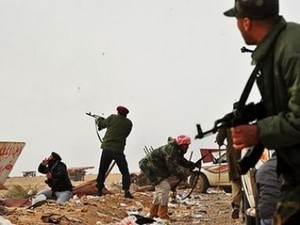 Dozens of people were killed and wounded when pro-Gadhafi forces shelled the al-Jufra oasis town of Hun, southwest of Tripoli, witnesses told Agence France Presse in the Libyan capital on Wednesday.

"There are dozens of people killed and wounded in the town and we cannot reach them because of the fierce bombardment," one witness told AFP by telephone.

Another witness said: "Gadhafi forces positioned in the city of Sokna, eight kilometers away are bombarding Hun which has been liberated and where the liberation flag has been hoisted."

The witness said that Hun's power station was also hit.

Earlier Wednesday, forces of the new Libyan regime said they had seized most of Waddan -- another al-Jufra town -- and were only facing pockets of resistance in other oasis towns, about 300 kilometers south of Sirte -- hometown of fugitive strongman Moammar Gadhafi.

"Seventy percent of the Al-Jufra has been liberated. Waddan is freed, our forces entered the town following NATO bombing of al-Hisha dam, 20 kilometers from the town," Mustafa Huni, an official from the National Transitional Council, told AFP in the eastern city of Benghazi.

NATO said that in Waddan and Hun it struck on Tuesday a military vehicle storage facility, four anti-aircraft guns and one armed vehicle.

The alliance also said that in and around Sirte it struck six air missile systems, two military ammunition or storage facilities, one command and control node, one military vehicle storage facility and one tank.

Libya's new rulers meanwhile declared victory in the battle for the key southern city of Sabha, one of the last bastions of Gadhafi diehards.

NTC officials said there were only small pockets of resistance in Sabha, Libya's largest desert city and home to a strategically vital military base.