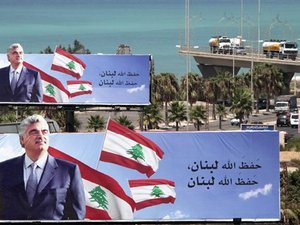 MP Marwan Hamadeh told the Special Tribunal for Lebanon on Wednesday how relations between slain ex-PM Rafik Hariri and Syrian President Bashar Assad broke down over the extension of President Emile Lahoud's term in 2004.

Hamadeh, on his third day of testimony, said he met with Hariri at the residence of Progressive Socialist Party chief MP Walid Jumblat in Beirut's Clemenceau area in August 2004 upon the former premier's return to the Lebanese capital from a meeting with Assad.

Hamadeh quoted Hariri as saying: “We want Lahoud and no one else.”

“This meant Assad was insisting on the reelection of Lahoud for a new term,” said the lawmaker who, along with other officials who attended the Clemenceau meeting, was astonished.

The MP said Assad threatened Hariri by saying he would “smash Lebanon” over his head and the head of Jumblat.

“It would be better for you to return to Beirut and fix things,” Assad told Hariri, according to the witness.

At that point, Jumblat advised Hariri to “avoid confrontation,” Hamadeh told the STL.

The PSP chief also advised the former premier to vote for the extension of Lahoud's term, and then resign from the cabinet and leave Lebanon to “preserve his dignity.”

Hamadeh said in response to a question by the prosecution that he and Hariri understood Assad's threat to include “bombings, internal strife, assassinations, revenge operations and anything that had already been in the dictionary of the Syrian regime since 1975.”

Hamadeh said Hariri traveled to Sardinia after the cabinet session that amended the constitution to extend Lahoud's term. He remained there for a short time because he fell and broke his shoulder and sought recuperation abroad.

“Hariri believed relations with Syria should have been corrected and that required the election of a new president and not a ahead of state completely submissive to the Syrian will,” he told the court in reference to Lahoud.

Hariri and the parliamentary majority voted for the extension of Lahoud's term until November 2007. The former president, who had been the army commander, was first elected for a six-year term in 1998.

Hamadeh, who at the time was a cabinet minister, later resigned along with several others to protest the constitutional amendment that guaranteed the extension.

Hamadeh briefed the STL Trial Chamber how the ex-PM and his allies were during the time of the extension “working on forming a strong opposition which could restrict what the Syrians and their allies in Lebanon wanted to impose on us.”

“I believe that Hariri voted for the extension term in order to avoid disputes and tensions in Lebanon. He was probably secretly hoping that he may create a change in the upcoming parliamentary polls,” explained Hamadeh.

“The extension allowed us to determine the number of the opposition MPs. The media later dubbed the these lawmakers as the 'list of honor' and I was indeed honored to be part of this group,” he said.

“We were determined to adopt peaceful measures to express our views,” he stressed.

A number of these MPs were later victims of assassinations, Hamadeh added.

Commenting on U.N. Security Council resolution 1559, he confirmed that he knew the council would adopt a resolution on Lebanon only days before its approval. But the lawmaker did not specifically state whether Hariri had played a role in its adoption.

“The international community sensed that Syria was pressuring Lebanese state institutions, instead of easing its grip on the country, in the buildup to the adoption of resolution 1559,” he remarked.

Security Council Resolution 1559 was adopted in September 2004. It called on "foreign forces" to withdraw from Lebanon and non-Lebanese militias to disband.

Pro-Syria media and officials in Lebanon waged a major campaign against the resolution, Hamadeh continued, while saying that there was a direct link between the extension of Lahoud's term and the adoption of the resolution.

The resolution would also require for the disarmament of Hizbullah.

Officials sought to avert the use of force to disarm the party and Hariri and Jumblat attempted to persuade international powers that it can be made to lay down its weapons through negotiations, explained Hamadeh.

“They pressed for this position in order to thwart foreign meddling in Lebanon,” he stressed.

“Resolution 1559, regardless of its interpretation by various forces in Lebanon, is identical to the Taef Accord and National Pact,” he said.

Hamadeh's testimony on Wednesday came a day after he told the STL that ties between Assad and Hariri began to deteriorate following talks in December 2003.

The MP said that the Syrian president had ordered Hariri to sell his shares at An Nahar newspaper in a bid to bankrupt the anti-Assad newspaper.

The billionaire statesman was the second-largest shareholder in the daily after the Tueni family.

Hamadeh is scheduled to continue his testimony on Thursday.

The STL, which is based in The Hague, will hear the testimonies of other officials and journalists who were close to Hariri.

Like Hamadeh, they are expected to testify on political tensions ahead of Hariri's February 2005 assassination in a massive blast on the Beirut seafront.

The court has indicted five Hizbullah members, who are being tried in absentia.

Prosecutors believe the conspiracy to assassinate Hariri began a month after the August 2004 threat made by Assad to the former premier.

Well, we know now, from the Syrian civil, how close Assad n HA are. It's not far fetched to link them to the harriri assassination.

justice is sprinting in our way and the culprits are being officially named.

Awww the brotherly love from Syria...It was felt throughout the 70's 80's 90's until this day. now i know why HA thanked them for leaving militarily. HA the voice of Bashar since 2000. Christians were on the same page before 2005 thats Aouni's cant argue with all that Hamadah is saying now in court

But the defense had the right to invite the for testimony any one it finds fit.

The embarrassment of the STL continues!!

Hearsay is not only allowed but very much aired openly to the media.

Hundreds of millions $$$$ from the Lebanese for this?

But we have nothing but "hearsay" testimonies.

your haha has become like an over exerted braying hee haw.

And yet lebanon is still full of syria's lap dogs who support these devils. Simply amazing!!

These stupid Hezbo-Aouniyeh always make fun of the STL because it can't "prove" that Hezbollah and Syria were behind this assassination. The funny thing is that Hezbollah claims it's an American-Israeli show trial, while Aoun maintains it was some shadowy group like Fatah al-Islam... so where's your proof that Fatah al-Islam did it? I mean you guys try to act like you wanna find "the real killers" yet you don't offer any proof that someone other than Hezbollah did it...

All Hamadeh did was confirm what the Lebanese have known for a long time: Assad was determined to keep Lebanon under his control. We all Hariri was against extending Lahoud's term, we know Assad threatened Hariri into accepting it, we know Hariri resigned in protest of the extension, we know Assad was trying to shut down all anti-Syria media (MTV and An Nahar).

This isn't just "hearsay", these are common facts that people know, and shouldn't be discredited.

continue: go to Dahiye and tell me how many Lebanese flags or pictures of the Lebanese president past or present you see hanging/flying anywhere where this sectarian/terrorist party is in control, but there is no shortage of Iranian flags and pictures of Khomeini, how pathetic. Maybe they can join the rest of us and start paying for services like the rest of all of us, but trash will be trash.

anytime anyone says something about Kizb or Syria its a consipiracy. Syria-kizb have never assasinated anyone or even placed pressure on Lebanon to fold under their hedgemony. Loooooooooool Sheep will be sheep.