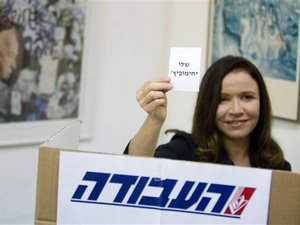 Former TV journalist Shelly Yacimovitch who was elected as head of Israel's Labor, beating former union boss Amir Peretz, on Thursday urged Israelis to join her in rebuilding the country.

The 51-year-old secured 56 percent of the vote in a run-off contest on Wednesday, compared with 46 percent for Peretz, leaving her to take the helm of the ailing party, according to official results published early on Thursday.

Turnout among the 66,310 party members eligible to vote reached 61 percent.

Peretz conceded defeat and congratulated Yacimovitch -- who becomes only the second woman to lead the Labor party after Golda Meir, who held the post from 1969 to 1974.

"I want to call on the citizens of Israel who believe in our values, to join the party," she said shortly after the results were published in comments reported in the Israeli media.

"Labor is the party which built the state, and the time has come to build it again," she said.

The once-mighty party, which dominated the political scene in the first three decades of Israel's existence, now has only eight seats in the 120-member parliament and has been without a leader since Defense Minister Ehud Barak jumped ship in January to form the centrist Independence movement.

Yitzhak Herzog, who was eliminated from the race in the first round of the primaries on September 13, said the party needed to "unite in order to regain its status as a significant player on the political scene."

Yacimovitch, who has a reputation as a pragmatist, benefited from wide support in the media and scored her best, results in the country's big cities.

She made her name denouncing social injustices but has remained very cautious on major controversial issues such as the nature of a peace deal with the Palestinians.

While Labor's left wing is staunchly opposed to ongoing Jewish settlement on Palestinian land, Yacimovitch sparked controversy last month when she told the Haaretz newspaper she did not see the settlement enterprise as "a crime."

Peretz, a former Labor leader and defense minister during the 2006 Lebanon war which was viewed by most Israelis as a failure, had hoped to return to the party's top spot in a bid to reinvent his political career.

Eventually, it was the woman he himself pushed into the Labor party limelight a few years ago who defeated him, sparking bitter enmity between the two former close allies.

Yacimovich's election comes after a summer of unprecedented social protest in Israel, which has seen tens of thousands of people taking to the streets to demonstrate against the spiraling cost of living.

Many believe she could ride the wave of popular discontent to bring her party back to the fore, with opinion polls showing Labor could secure 22 seats in the Knesset under her leadership.

But commentators warned that Yacimovitch's "real test" was about to begin. "After the celebrations are over, a great deal of work awaits Yacimovitch," said the top-selling Yediot Aharonot daily.