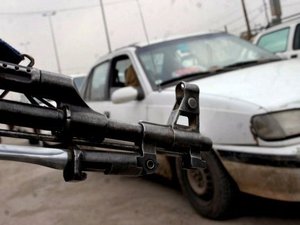 Syria said on Thursday that "terrorists" had killed five security force members and wounded 17 in the restive area of Daraa while pro-democracy activists said three civilians were killed in Homs, another hub of protest against President Bashar al-Assad.

Organizers of the protests against the Assad regime have used their Facebook page, "The Syrian revolution 2011," to rally support for their cause.

The activists said the move against communications coincided with a call by militants for a Friday demonstration under the banner "Unity of the Opposition", to overthrow the regime which they termed "a national duty."

The main Muslim day of prayer has seen weekly protests against the regime, with thousands of protesters surging into city streets to be met with a harsh crackdown by security forces.

On Thursday, the official news agency SANA said: "Five members of the security forces have been killed and 17 wounded in an ambush mounted by some armed terrorist groups on the road from Tiba."

The area is in the southern Daraa province which was one of the main springboards of opposition to the authorities when protests began on March 15 this year.

A customs official was also killed by "armed men" and two members of the security forces were wounded in Qseir south of Homs, SANA said.

Damascus does not accept any popular opposition to the authorities, saying instead that "armed gangs" and "terrorists" are trying to sow chaos in the country.

Local Coordination Committees (LCC) have joined a National Council of opposition which was formed at the end of August during an Islamist-inspired meeting in neighboring Turkey.

On Thursday, the LCC reported that three civilians had been killed in Homs, while in Daeel, security forces opened fire on a group of students from different schools, with some being wounded and several arrested.

It said the students were aged under 15 and that tanks were now deployed in front of the Daeel public high school.

The Syrian Observatory for Human Rights also said that hidden gunmen had opened fire and killed a civilian in Homs. It was not clear whether this was a separate killing.

It also reported the arrest on Thursday of 57 people nationwide, including five pupils. According to the Observatory, 70,000 people have been detained since mid-March, with 15,000 still behind bars.

Prominent dissident Mohammed Saleh, who this week met members of a visiting Russian parliamentary delegation, was also arrested on Thursday by intelligence agents in Homs, the Observatory said.

Saleh reportedly told the Russian MPs about "the sufferings of the people of Homs," it added.

In Daraa province, security reinforcements had arrived in the towns of Jezah and Tayebeh, the LCC said, while security forces had deployed in Nabu area in suburban Damascus.

According to another LCC report, security agents, troops and pro-regime militia in Homs had spread "a climate of terror" since late last Monday "searching houses street by street, kidnapping many young people and taking them to a stadium that they had transformed into a prison."

Western governments have sought to increase pressure on Assad and on Wednesday U.S. President Barack Obama called on the U.N. Security Council to impose sanctions on Syria.

In Geneva, the Office of the United Nations High Commissioner for Human Rights said the death toll from the regime's bloody crackdown on protesters since mid-March rose to more than 2,700 people.

the end is near for Bashar and his spies Mowaten and Jabal Amel as they start learning Farsi to prepare them for their exile in Iran...

A ridiculous press release out of desperation to justify the ongoing carnage.
The end is near, they won't do it their way.

A ridiculous press release out of desperation to justify the ongoing carnage.
The end is near, they won't do it their way.

But the BBC only counts what people from Lebanon, who know very little especially in what relates to their condition of idiocy, tell them. Based on the reports by the retards since the troubles started, there is nobody left alive in Syria except Ghawar al Toshi and Abou Janti.

Syria TV??? No credibility at all. Let the world media in to see it if it is as you say?

Syria TV??? No credibility at all. Let the world media in to see it if it is as you say?

Ok but by who? Goverment , how else do you start hatered

If there are terrorists, where did they come from? Suddenly Syria had tens of thousands of armed terrorists appear out of thin air after decades of relative stability? All these are lies and this is a revolution that is not being put down by killing, torture or lies either.

How long will the rich of Syria support Assad as the economy collapses, money and oil run out and the whole world cuts off economic and political ties to that nation. The fall of Assad is only a matter of time. Even Nasrallah isn't daring to talk too much about the Syrian situation any more because he (like his masters in Iran) can see the writing on the wall.

Hope fully after the revolution in Syria is done, some Lebanese can finish the job and take out some Syrian regime spies like Qandil, Qanso, Pakradouni, Wahhab and others.

@mowaten: you're full of crap, the Libyan revolution started completely locally. It would have been better for Europe and the US to have Qaddafi stay to keep stability and keep the oil flowing you idiot. There's no benefit to the west to bring down their former friend Qaddafi.

The revolution in Syria started with small protests and grew when children were punished and small protests were put down by force. This fate that has befallen the corrupt murdering Assad regime is their fault because they have never worked to improve freedoms for their citizens instead working on getting good deals for Assad, his family and friends to steal money and fill their pockets with the people's money.