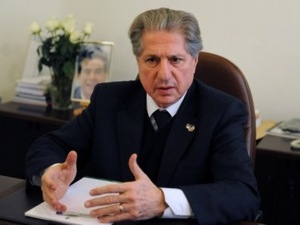 Kataeb Party leader Amin Gemayel expressed concern on Thursday over the “dangerous situation” imposed by the vacuum at the Baabda Palace, calling on the Lebanese arch-foes, in particular those behind the obstruction of the presidential elections, to assume their responsibilities.

“Lebanese factions shouldn't under any circumstances obstruct a national, legal, constitutional and political path,” Gemayel said in a lengthy interview with the Kuwaiti al-Rai newspaper. “It is an unforgivable sin.”

He pointed out that “the risks, burden and crises are accumulating in a time we desperately need a full-functioning Lebanese authority.”

The Christian leader lashed out at the sides that are “on purpose impeding the elections and prolonging the vacuum.”

He regretted that all his efforts to bridge the gap between the rival parties went down the drain, expressing determination to continue his endeavors for the sake of stability in the country.

“The foreign intervention deeply affects the electoral process but the key responsibility lies on the political sides.”

He rejected claims that the presidency crisis is only Christian, describing it as “political heresy.”

“Christians never agreed on a single presidential candidate... We should assume our responsibilities by heading to the parliament and electing a new head of state according to parliamentary norms,” Gemayel said.

The presidential election session was postponed on Wednesday for the sixteenth time following a lack of quorum at parliament.

Asked about a proposal made by Change and Reform bloc of Free Patriotic Movement leader MP Michel Aoun's to allow the people to elect their head of state, Gemayel argued that the situation doesn't permit such an amendment.

The March 14 coalition official noted that his ally Lebanese Force leader Samir Geagea and Aoun have no chance to win the presidential elections.

Gemayel stressed that Speaker Nabih Berri is keen to preserve the legislature and democratic course in Lebanon, noting that Berri's recent optimistic signs regarding the presidential crisis are baseless as “nothing has changed.”

Lebanon has been without a president since May when the term of Michel Suleiman ended.

Hizbullah and the Change and Reform bloc have been boycotting electoral sessions due to a disagreement with the March 14 camp over a compromise presidential candidate.

Geagea had previously accused them of adopting such measures in order to blackmail political blocs into electing Aoun as president.

Concerning the extension of the parliament's tenure, the Kataeb chief considered the matter as “irrational and unacceptable.”

Despite the ongoing rift over the Christian's most prominent post at the state, lawmakers attended earlier this month a session to extend their tenure. The MPs voted once again to delay parliamentary elections and extended their mandate until 2017, which was met by a huge popular dismay.

The session however was boycotted by Aoun's FPM lawmakers and the Kataeb Party.

In May 2013, the parliament voted to extend its own mandate for 17 months after the rival political parties failed to reach a deal on a new electoral law other than the one based on 50 small-sized districts in a winner-takes-all system.

Asked if he will testify before the Special Tribunal for Lebanon, Gemayel said: “It's out of the question.”

“Justice should take its course swiftly without any haste,” he added.

MP Marwan Hamadeh began on Monday his political testimony before the STL.

His testimony will pave the way to tackling the political motivations linked to the assassination of former Prime Minister Rafik Hariri in February 2005.

The in absentia trial of five Hizbullah members accused of murdering Hariri kicked off at the STL in The Hague in January.

The February 14, 2005 seafront blast killed 22 people including Hariri and wounded 226.

To date, more than 35 witnesses have testified before the tribunal and a total of 461 exhibits were admitted into evidence.

Sad, Lebanon is being decided by Iran and Syria....shame.

Ironic, coming from the biggest paid mouthpiece of them all.

yes for sure...btw not definitely sure this guy can distinguish serious situation from 'normal' situation (for Lebanese context of course)

...time to get retired ...please gemayel, you have to live the political arena...for good !!!

Wow this is so surprising "Gemayel Expresses Grave Concern over 'Dangerous' Situation" and here we all are thinking things were great! looooooool

Good old Amin, talks, talks yet so little would we understand coming from him. he was like this decades ago, sadly, he remains exactly the same, even if the turf on the head is gone grey. Sheikh Amin, time to throw the sponge and let Sami run the show.