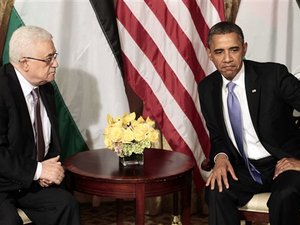 Palestinians on Thursday slammed U.S. President Barack Obama's address to the U.N. General Assembly, calling it a display of U.S. bias towards Israel.

Commentators, politicians and ordinary Palestinians alike said Obama's speech on Wednesday, just days before the Palestinians apply to become a U.N. member state, showed Washington was incapable of serving as a fair broker between Israel and the Palestinians.

Gaza's Hamas leaders said the address showed that the Palestinians and the Arab world should stop relying on Washington.

"Obama's speech reflects the American bias towards the Israeli occupation and it proves that the continuing Arab and Palestinian bet on the Americans is wrong," spokesman Sami Abu Zuhri told Agence France Presse.

"We call for the adoption of a national Palestinian strategy based on self-reliance and the Arab and Muslim world in light of this American and Israeli arrogance."

Commentators in the three main Palestinian newspapers all took the same angry and disappointed tone over the U.S. president's remarks.

"Obama's speech... was a disappointment to those who had been waiting for something new from him, provoking extreme outrage and anger," wrote Talal Okal in al-Ayyam newspaper.

"It also closed all the doors and windows left open by the Palestinian president to allow some movement."

Okal accused Obama of "deepening the bias towards Israel's narrative, positions and policies".

"He offered more than just a token of bias and love towards the Jews and Israel. What he offered in his speech goes so far as to show compliance with, and full acceptance of, the policies and narrative and desires of Israel," Okal wrote.

"He put the Jews and Israelis in the position of victims who are surrounded by hatred and wars against them by Arab countries, but this speech of his contained nothing of the suffering of the Palestinians."

Al-Ayyam carried a cartoon showing Obama delivering his address with a speech bubble in the shape of a Star of David coming from his mouth.

Although the French leader failed to offer support for a Palestinian bid to obtain full state membership of the United Nations, he proposed the alternative of an upgraded observer status through the General Assembly, and made clear reference to Palestinian suffering, Tibi said.

"Unlike the speech given by French President Nicholas Sarkozy, who devoted his whole speech to the Palestinian issue and spoke positively about the rights of the Palestinian people, Obama's speech was biased towards the Israeli narrative," he wrote.

"And more than that, in the same speech in which Obama praised the uprisings and revolutions by the Arab people against tyranny and oppression, he declined to even mention Israel's occupation of Palestinian land."

On the street in east Jerusalem, there were similar murmurings of discontent.

"It wasn't a surprise really, Israel and America are one, and Obama for sure will support Israel against the Palestinians so he is re-elected in 2012," said Shadi Elias, 22.

In Ramallah, school director Mohammed Zeidan accused Obama of being "fair to every Arab country except the Palestinian people."

"When Obama came into the White House as president, his positions and aspirations gave us hope but... Obama showed the whole world yesterday that America cannot be anywhere but by Israel's side always and he is no different from the American heads of state who came before him."

What did you expect Obama to offer?....Am not suprized...since elections of 2012 are just around the corner. We all know that AIPAC makes the decsions in Washington..Need I tell you more?

Bias towards Israel? the speech sounds like it was written by Bibi himself... How Obummer would sink so low as to become the mouthpiece of AIPAC and the rest of the pro-Israeli lobby is beyond any comprehension!

Peace will not come through statements and resolutions at the United Nations," Obama said. This may be true, but it has yet to be tried and tested. What we do know is that peace has not come through the diplomatic wrangling of the United States. The current president of the United States would rather continue the myth of progress initiated by those who sat in the White House before him, a myth that includes a sense of self-awarded respite from concern for those who are in lethal trouble on the part of those who aren’t.
Khalilah Sabra
MAS immigrant Justice Center