NATO Says it Can Achieve Libya Mission within 3 Months 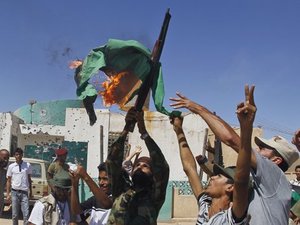 NATO can achieve its mission in Libya within the next three months, the commander of the NATO military operation, Lieutenant General Charles Bouchard said Thursday.

Asked for an assessment a day after NATO allies extended their air campaign in Libya by another 90 days, Bouchard said at a press briefing in Brussels: "I'm highly confident we can complete this mission well within this timeframe."

As forces loyal to ousted strongman Moammar Gadhafi maintain resistance on the ground, NATO allies extended the campaign in Libya for three months.

NATO Secretary General Anders Fogh Rasmussen said Wednesday that warplanes would stay in the air as long as Libyan civilians are under threat but the mission will be under constant review and could be called off "at any time."

"We are determined to continue our mission for as long as necessary, but ready to terminate the operation as soon as possible," Rasmussen said, calling the extension a "technical rollover" of a mission that has lasted six months.

Any decision to end the air strikes will be taken in coordination with the United Nations and "in line with the will of the Libyan authorities," he said.

"This decision sends a clear message to the Libyan people. We will be there for as long as necessary, but not a day longer, while you take your future in your hands to ensure a safe transition to the new Libya."

The current 90-day mandate was due to expire on September 27.