Commander: Advance on Gadhafi Hometown Delayed for Lack of Ammo 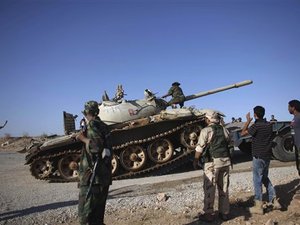 Troops advancing on Moammar Gadhafi's hometown Sirte from the east have put off any offensive for a week for lack of ammunition, a brigade commander told Agence France Presse on Thursday.

"Fighting has been stopped for a week. We are facing a shortage of ammunition," said Commander Mustafa bin Dardef of the Zintan Brigade, whose troops are deployed on the front line 25 kilometers (15 miles) east of Sirte.

Bin Dardef said he was heading to Libya's main eastern city of Benghazi with a group of his men to try to organize new supplies.

In the meantime, troops loyal to the new regime would establish a "strong defensive line" around the town of Sultana, which they captured early on Monday and is now five kilometers (three miles) behind the front line.

"Yesterday we deployed bulldozers to dig trenches along the front line from our side in order to hold our positions," he said.

When asked whether troops advancing on Sirte from Misrata to the west and Waddan to the south would also hold back, Bin Dardef said he was still waiting to hear.

"We have asked the other fronts also to hold their fire, so we can coordinate better. But we have no information on their latest plan," he said.

Fighting outside Sultana has been intense in recent days with Gadhafi forces putting up stiff resistance. The front line has barely moved in the three days since the town's capture.

A group of fighters returning from the front line to their nearby base to collect food supplies reported a lull in fighting on Thursday.

"There was some sporadic shelling and machine-gun fire early in the day, but now it is rather quiet," said fighter Omar Awad.