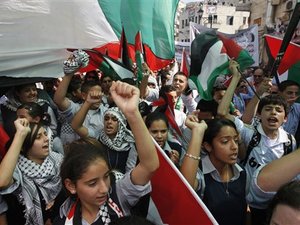 Around 1,000 Palestinians gathered in the West Bank city of Ramallah on Thursday to protest against U.S. President Barack Obama's speech to the United Nations.

The protesters carried signs deriding the United States and Obama for his address, in which he reiterated his opposition to the Palestinians' attempt to win U.N. membership for their state, saying there was no "shortcut" to peace.

"Shame on those who pretend to be democratic," read one banner held up by the crowds who gathered outside the Muqataa, the headquarters of Palestinian president Mahmud Abbas.

"America is the head of the snake," read another placard carried by demonstrators, who massed by a pavilion decked out with the flags of the more than 120 nations who have recognized a Palestinian state.

The demonstrators were planning to pass by the tomb of the late president Yasser Arafat before heading to Manara Square in the city center, where at least 15,000 people gathered on Wednesday to support the U.N. bid.

The Palestinian workers union said it was planning to issue a call for rallies to take place after the main weekly Muslim prayers on Friday outside U.S. embassies across the Arab world.

Information ministry official Mutawakil Taha accused Obama of sounding "like an Israeli settler," and said his speech came in the context of Washington's longstanding defense of Israel at the United Nations.

"Fourty-two U.S. vetos at the U.N. have enabled Israel to continue apartheid in the region and Obama's speech exposed America, which pretends to support the Arab revolutions," he told Agence France Presse.

The Palestinian media was equally scathing about Obama's address, which came two days before Abbas is to formally submit a request that the U.N. admit a Palestinian state as a member.

Commentators slammed Obama, saying he illustrated the depth of Washington's bias towards Israel and failed to even mention the suffering of the Palestinians or the ongoing construction of Israeli settlements in the occupied West Bank.