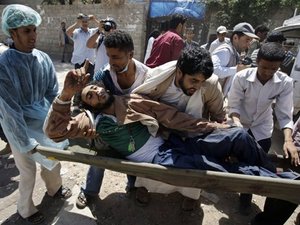 Soaring tensions between troops loyal to Yemeni President Ali Abdullah Saleh and his opponents torpedoed efforts on Wednesday by international mediators to promote a Gulf-initiated deal aimed at ending the political impasse that has gripped the country for months.

At least 10 people were killed in separate battles that rocked the capital on Thursday.

Four civilians died when they were caught in the crossfire of fighting that erupted between Republican Guard troops commanded by Saleh's son Ahmed and dissidents loyal to General Ali Mohsen al-Ahmar, witnesses and medics said.

Nine people were also wounded when a mortar round slammed into Sanaa's Change Square and several tents put up by protesters caught fire, witnesses said.

The defense ministry website, 26sep.net, reported that 15 soldiers were killed when Ahmar's troops attacked their camp.

Fighting which had been concentrated since Sunday in the city center and Change Square spread on Thursday to the al-Hasaba district, where gunmen loyal to powerful dissident tribal chief Sheikh Sadiq al-Ahmar traded fire with followers of Saghir bin Aziz, a tribesman loyal to Saleh, witnesses said.

Four people were killed and six were wounded in shelling that targeted Bin Aziz's home, according to 26sep.net.

Tribal sources said that Ahmar's forces hit Bin Aziz's home with "13 shells," adding that the fate of the man who belongs to Yemen's most influential tribe the Bakil, and who is an MP as well as a Republican Guards officer, "is unknown."

Witnesses said shells were fired from the interior ministry building at the homes of two Ahmar brothers, Hemyar and Hussein.

Thursday's deaths bring the toll since Sunday to 95. Medics said hundreds more had been wounded, adding that most of the casualties were civilians.

"I can no longer open my store for fear of stray bullets, whether from the opposition or government forces. Every day there are many casualties due to the stray bullets," said Mohammed al-Jabiri, 25, owner of a mobile phone shop.

"The city is empty. Schools, banks and businesses are shut as the ghost of war looms over Sanaa," one resident told Agence France Presse.

Another, who has been holed up in his home for days, said life had become unbearable.

"My children haven't slept in a week. They have nightmares every night from the shooting and the explosions," said Amin al-Faqih, 42, a father of three.

"My children beg me every day to take them to a place far far away from here, away from the nightly explosions and gunfire."

Commuters said government forces have closed all entrances to the capital, with no cars allowed in or out.

The soaring violence has raised long-standing fears that Yemen, which faces a Shiite Zaidi rebellion in the north and the growing influence of al-Qaida in the south in addition to a southern separatist movement, is heading for full-blown civil war.

U.N. envoy Jamal Benomar told AFP late Wednesday that the deteriorating security situation, and the reluctance of both sides to reach a political resolution, raises "the risk of civil war breaking out."

Benomar arrived on Tuesday in Yemen where he and Gulf Cooperation Council chief Abdul Latif al-Zayani have been working to broker a peace deal between the warring parties.

Zayani left on Wednesday after efforts to reach a political consensus failed, saying the parties were not ready to negotiate.

He is expected in New York on Friday to discuss the crisis with GCC foreign ministers and international diplomats gathered at the U.N. for the annual General Assembly, a Yemeni diplomat said, requesting anonymity.

Protesters who had camped in their thousands in Al-Zubairi Road since Sunday fled after the main boulevard in Sanaa city center became a battlefield, an AFP correspondent said.

However, thousands remained camped out at Change Square to the north of Al-Zubairi, guarded by Ahmar's dissidents.

To the south, Saleh's security forces and the Republican Guard are mostly in control, largely dividing the capital in two with Al-Zubairi serving as an increasingly bloodied demarcation line.

The latest fighting broke out on Sunday when swarms of protesters marching from Change Square towards the city center in a bid to extend their sit-in came under fire from Saleh's forces, prompting intervention by Ahmar's troops.

Zayani and Benomar had been hoping to convince the opposition and Saleh's government to sign the initiative, which calls on Saleh to step down and hand over all constitutional authorities to his deputy.

In return, Saleh and his family would be granted immunity from prosecution.

Saleh has been in Riyadh since being wounded in a June explosion at his palace compound in Sanaa.