Libya Holds Back from Assault on Last Gadhafi Redoubts 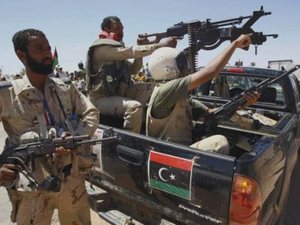 Forces loyal to Libya's new rulers said they were holding back on Thursday from advancing on Moammar Gadhafi's last redoubts despite their capture of two key southern oases.

The commander of NATO's Libya air campaign, Lieutenant General Charles Bouchard, said he was confident the mission could be completed "well within" three months after the alliance extended it for another 90 days.

Meanwhile a new regime official said oil production will resume soon but a return to pre-uprising production levels is still far off.

"We will return to production in the very next few days but exports will take longer," Mustafa el-Huni, who heads the economy, finance and oil commission at the National Transitional Council (NTC), said.

But he added that "resuming Libya's normal production of 1.6 million barrels of oil per day (bpd) is still far off."

Optimistic forecasts see a return to production levels existing before NTC fighters overran the Gadhafi regime taking six to nine months, Huni said, and a year according to pessimistic outlooks.

On the battlefront commanders said the new regime forces were Thursday in full control of all three main towns in the al-Jufra oasis, a day after the capture of Libya's largest desert city, Sabha, in the deep south.

The defeat of Gadhafi loyalists in the Saharan oases left diehards in his hometown of Sirte and in the desert city of Bani Walid to its west effectively cut off from any line of escape to the south.

On Wednesday an NTC official said new regime forces had seized Waddan on Tuesday and took Hun the following day.

"Two of our fighters were wounded. There were 11 dead and 25 wounded among Kadhafi's men and we captured 14," said Kamal al-Hzifeh, the coordinator between the military command in al-Jufra and the NTC.

In its operational update on Thursday, NATO said its warplanes had hit four anti-aircraft guns and a vehicle storage depot around Hun, and struck as well a command and control node and five surface-to-air missile systems in and around Sirte.

Bouchard added that Gadhafi forces "are no longer able to conduct coordinated operations throughout Libya," while the number of people at risk from pro-Gadhafi military action had fallen to about 200,000.

He said he had no idea where Gadhafi was, but stressed that the fugitive strongman continues to "give orders" and "entice regime forces" to act.

NTC commanders west of Sirte said they had been told to expect further NATO air strikes on Thursday and had orders not to advance.

East of Sirte, commanders said that they had postponed any offensive against the city for at least a week for want of ammunition after heavy fighting.

"Fighting has been stopped for a week. We are facing a shortage of ammunition," said Commander Mustafa bin Dardef of the Zintan Brigade, whose troops are some 25 kilometers east of Sirte.

He said he was heading to Benghazi to try to organize new supplies.

Meanwhile, troops loyal to the new regime would establish a "strong defensive line" around the town of Sultana, which they captured early on Monday and is now five kilometers behind the front line.

Medics at an NTC field hospital at a point called Kilometer 50, behind the front line, said one fighter had been killed and three wounded on the western side of Sirte on Thursday.

Meanwhile at the roundabout on the frontline on the edge of Sirte, two dozen NTC fighters were on standby in pick-up trucks, armed with anti-aircraft guns and other weapons. But they did not advance into Sirte.

"We are still giving time for Sirte civilians to leave the city," Zlitni told Agence France Presse, as dozens of families were seen fleeing west of Sirte.

Mohammed bin Sirtiya, who arrived with his wife and eight children, said life in Sirte had become "unbearable."

Politically the NTC scored another point Thursday as Algeria, which had delayed recognition of the interim government, announced it now recognizes the new rulers as Libya's legitimate leadership.

"The Algerian government declares its willingness to work closely with the new Libyan authorities to establish a bilateral cooperation to benefit the two brotherly nations and promote conditions of peace, security and stability in the region," the APS news agency reported.

In Tunis, a justice ministry spokesman said Libya's former premier Mahmudi had been arrested on Wednesday and sentenced to six months in jail for illegal entry "with immediate effect."