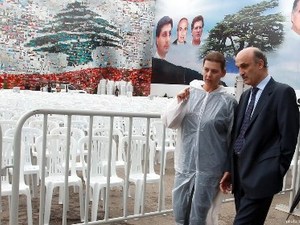 Former Maronite Patriarch Nasrallah Sfeir will not address the political situation in Lebanon during the Saturday’s mass commemorating the fallen members of the Lebanese Forces, revealed information obtained by Naharnet on Friday.

Patriarch Beshara al-Rahi will be unable to attend, but he will send his deputy Roland Abu Jaoude who will deliver a speech on the patriarch’s behalf.

LF leader Samir Geagea had inspected on Friday the final preparations for the mass, especially given the poor weather conditions.

The head of the Lebanese Forces media department Hani Safi told Naharnet that Geagea’s speech will include an initiative towards Hizbullah.

He did not disclose further details.

His “strong-worded speech” will also tackle the situation of Christians in Lebanon and the region, as well as the Special Tribunal for Lebanon and the developments in Syria, added Safi.

What difference will it make if Sfeir addresses it or not? He and the Lebanese Fartses are history, and thanks for Patriarch Al Rahi and the honorable General Michel Aoun the future of the Christians will brighten again, less the stark blemishes (or spots of filth) of the criminals of the Lebanese Fartses. If their leader is a criminal, then what does this say about the followers? Sad truth!!!

All initiatives should be addressed to Ayatoulah Kameini ( The Don Corleone ) Of this mafioso . Why Waste your time with Pinnochio ( Sayed Hassan )

If Michel Aoun is a schizophrenic, megalomaniac, power-hungry, filthy clown. Then what does this say about the followers? Sad truth!!! ;)

I can't stand how Geagea is using the image of Danny Chamoun (RIP). He kills him, kills his family, kills the little child hiding under the bed, even kills the family dog, and then uses his image! Disgraceful. Even worse is Danny's idiot brother, Dory.

Ado. You still insist on this. Don't you think Dory Chamoun would be the first to distance himself from his brothers killer? The victims own brother disagrees with you. Are you telling me that you know something Dory Chamoun doesn't know? Or that Danny Chamoun means more to you than his own brother? Geagea isn't a saint by any stretch of the imagination. But this is one crime he didn't commit. Had he done it, his supporters in the chouf would've dropped him. Try and outgrow your hatred... and treat all warlords equally ;-)

I don't see The Picture of Mr Karami, Frangieh, General Kanaan,....
It's simple because Mr GreenThumb has “Martyred”them....
It's amazing how some people still believe that the Vampires are nice creatures.....
MrBrain

Notice the poster in the background:

On the LOWER left: Bachir Gemayel, Rene Mouawad and Dany Chamoun who Geagea killed along with his family and NOT including Tony Frangieh who Geagea ALSO killed.

On the UPPER right - and much LARGER: Rafiq Harriri (Allah yghame'lo).

Dear Lebanese Forces supporters, how do you interpret this?

Hezbollah and M8 only commerate the martyrs of greater Iran and greater Syria...

@ Mr brain, it is quite funny how you think, practically as if you had no brain to remember? Mr Karami your hero, may his soul rot in hell a million times, is the one that divided the Lebanese army, in favor of the ennemies the PLO and PFLP, which brought the muslim lebanese to the other side of the fence rather than siding with their christian counterpart and brothers while our country was at risk and palestinian and syrian presence were here to terminate the whole of Lebanon. And dont tell me christian invited the PLO ( it was the cairo agreement by a certain general emile boustani at the time ) and for the syrians, the christians only advised Syria that they should intervene to stop the PFLP that was a syrian tool to create chaos. and we all know how it turned out , everybody against christians rather than our muslim and druze brothers with us, anyway Karami was a traitor, Frangieh was a victim i admit but its war, and Kanaan was a good man but unfortunately General Aoun forgot him

@safro
i agree 100% with you, but how about if their leader is a pussy who runs to the closest embassy, tell me then what it says about his followers.
i suggest you get you pea-sized brain out of your ass and think of your country first, before thinking of your leader/master.

Assuming that Sfeir does address the political situation, what is he going to say? I was a dumb idiot and a failed Patriarch who got involved in destructive politics that Hariri's Christian clappers follow and have brought nothing but a pathetic state of the Lebanese Christians? Will he say that because of all that and much worse the Pope gave me the boot of my life? All he can do is pray for those who were used by the criminal enterprise of the Gemayels, the Chamouns and the Geageas and were killed in vain considering the pathetic state of the Lebanese Chsristians? What? In this case I am not sure that God will listen to such a failure. It's TOO DAMN LATE, old fart.