Suleiman to Ban: Let Israel Implement Resolution 1701 and Then Ask Us about 1559 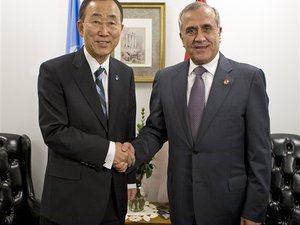 United Nations Secretary General Ban Ki-moon encouraged on Thursday Lebanon to invest in its natural resources that are located in areas that are not under dispute, reported As Safir newspaper on Saturday.

It revealed that Ban “surprised” the Lebanese delegation in New York by bringing up the issue of U.N. Security Council resolution 1559, especially regarding the disarmament of all armed groups in Lebanon.

He told the U.N. chief: “Lebanon should first implement resolution 1701 and then ask us about 1559.”

The two officials had discussed in New York the issue of Lebanon’s maritime border and its dispute with Israel over the matter.

Governmental sources told As Safir that Lebanon will soon present a draft law on its oil and gas resources and exclusive economic zone.

Tensions between Lebanon and Israel have recently escalated over the dispute over the maritime borders between the two sides in light of the discovery of offshore oil and gas in the Mediterranean.

Suleiman is worthless, maybe even worse than worthless.

I seriously do not get it with these guys. Mr. Suleiman I am with you on letting Israel implement 1701, but should I remind you that the so-called "divine heroes" also have a larger share of implementations to make in that very resolution 1701?

Did he even read the first couple articles of the resolution?

We have had enough of incompetent presidents!

OH MY GOD! the president! it speaks!!

Mr President, be a law abiding country that respect its international obligation. You will need it when Hizbollah drags us into tjhe next foolish armed conflict. Do what you have to do. If you' re neighbour doesn't respect the law, you're not entitled to do the same. It doesn' t release you from your obligations. Show you are better then him. If we were to apply your logic, I would say let us break the law since Hizbollah is breaking it every day. It's an invitation to murder to avenge murder. You either abide by the law, whether an individual or a country, or take it in you own hands! Remember that when you don' t have much to say, and you're invited to speak!

what a cheap guy, we want berri or nasralla to be our president

I prefer Gaddafi to Nasrallah or Berri as President , Jabal and don't know where! He should be elected as président of the Hezb, and teach them a few tricks they don't know. How for instance to turn someone into a concrete pillar in a building under construction!