Gunshots from Syria Fired at Akkar 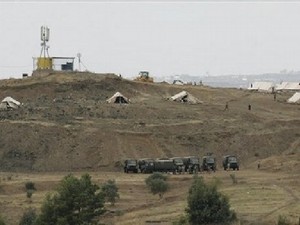 Heavy gunshots were fired from Syria towards villages in the northern region of Akkar Friday night, creating a state of panic among the residents in the area, reported Voice of Lebanon radio on Saturday.

Several of them consequently moved to nearby villages in al-Rihanieh and Wadi Khaled to escape the gunshots.

Last week, a Lebanese army patrol was accidentally fired at by the Syrian army, also in the North at the Lebanese-Syrian border.

A 15-member unit from the Syrian army entered Lebanon near the northern town of al-Mwanseh as it was following shepherds along the Lebanese-Syrian border.

The Lebanese army soon arrived at the scene to inspect the affair.

The Syrian unit then accidentally fired at the army after it had mistaken its identity.

Over the past few months, hundreds of Syrian refugees had flooded into northern Lebanon to escape the crackdown against anti-regime protests.

In May, one woman was killed and several other people were wounded when gunshots were fired from Syria towards the town of al-Buqaia in the North.

Bashar is going down and trying to take Lebanon with him...

Good riddance to him and long live a Free Lebanon and Free Syria...!

the syrian soldiers are scared of their shadows these days they fire at anything...

Why doesn't Lebanon file a UN Complaint against Syria for all these violations. The Tyrant's army has so far killed a Lebanese woman and wounded many Lebanese citizens, they have opened fire on Lebanese soldiers numerous times, how much more do we need before filing a complaint ? we do it against Israel all the time for much simpler reasons.

Very well said will_rogers. Or the lebanese Government is under the full control of Bashar in his foreign Minister Ghosoun!!!!!! But not forget his Huzbolah Army in Lebanon

The Israeli army cut a tree, and all hell breaks loose! The Syrian army fires into our villages, not a peep! Of course people like jabalamel are going to immediately label me as a "zionist" and "traitor"....so let me beat you to it by saying: I am a Lebanese, I believe that anyone and any country that does anything to breach my country's teritory should be treated as an enemy, be it Israel or Syria, and ESPECIALLY Syria! The one country in the region that has harmed Lebanon the most! "Al Shakika" HA! To this day Syrians are invading our lands along the border and taking them away from their truthful Lebanese owners....why don't you want to liberate that Hizbullah!

Another proof that the Sunni crazies must be pursued all the way to the filthy Saudi Arabia. 3alehom