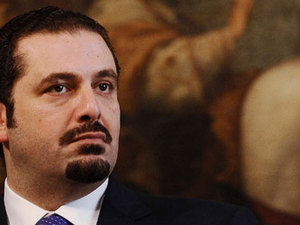 Former Prime Minister Saad Hariri praised on Saturday Palestinian President Mahmoud Abbas’ speech at the United Nations where he demanded that Palestine be admitted as a full member state at the international organization.

He said in a statement: “The speech revealed Israel’s hostile plans and its hidden intentions to reject all efforts to achieve peace.”

“It also reflected the Palestinian Authority’s openness to these efforts and its insistence on maintaining the peaceful course,” he added.

Meanwhile, Hariri noted that Israeli Prime Minister Benjamin Netanyahu’s speech at the U.N. “is an effort to evade the Palestinian people’s legitimate rights and reject the will of the international community.”

The former prime minister called on the Arab world to demonstrate solidarity with the Palestinians in order to allow the Palestinian Authority to achieve its mission to establish an independent state.

“Palestinian national unity is the cornerstone for any confrontation of the Israeli dangers,” he concluded.

Abbas made history in his people's long quest for statehood as he formally asked the U.N. on Friday to admit Palestine as a full member state.

Snubbing fierce opposition from Israel and its regional ally the United States, Abbas handed a formal application to U.N. chief Ban Ki-moon buoyed by more than 120 nations which have already recognized a Palestinian state.

He won huge applause and a partial standing ovation as he later stepped up to address the U.N. General Assembly and vowed the Palestinians were ready to return to peace talks if Israeli settlement activities cease.

Waving a copy of the request, Abbas said he had submitted an "application for the admission of Palestine on the basis of the June 4, 1967 borders" with Jerusalem as its capital.

I was always supporting 14 March , but if my leader is always away from lebanon due to security reason , how can i support him , how
can i support a leader who is always in Saudi, or in France ?Mikati is better then him , at least he is always in lebanon n

Asking for statehood on only 22 % of palestine will not achieve peace. Only the dismantlemtnt of "israel" will bring peace. There will never be peace in our region until "israel" is removed. It came in to existence by the use of violence and will be removed in the same way. Just wait and see. Israel has no chance of surving. They will start new wars because they have many issues to deal with such as stealing water and oil from lebanon which they consider to be their right to do as they consider all the levant to belong to israel and thus all our resources are theirs. However despite all the mayhem that they will cause, in the end they will be the ultimate loosers.

If you care about lebanon you would unite the people not divide them. Your goal was only revenging for your fathers death who was killed by the jews. you ignored everything else while you were in power. now its too late for you to make a statement . you are wet behind the ears. we need men in lebanon not kids. My advise to you is to leave us alone and go on with your life . stay away from politics . The sunnis in lebanon were blindfolded by you. and your revenge. I hope now they are awaken and have a new prescription glasses.

you and many like you, that were misguided during the siniora years, are now realizing the truth and who is who in lebanon

To: Omar Marakbe: Although Arabs are a majority in the region you wouldn't accept few million Jews in a piece of land occupying 0.14 % of all Arabian land. Despite all your efforts to kick us out from our home land you will fail again. its not because you are a majority its because of justice, we were here thousands of years before Arabs. While you were tribes of vagabonds we already lived in Israel believed in one God and knew to read and wright.
We'll also remain many years after you will vanish to the wind like other nations in the history. I know its difficult for a brain washed like you to accept but I don't care, it just proves how small and narrow minded are the Arabs, you never respected minorities I know its in your blood, same as you do not respect other religions , we can see it in Afganistan what fanatic Taliban did to Budhaa ancient statues. You may continue eating your hearts, kill each other as this you do perfectly and keep hating Jews and your bad lack for being Arab.

Danny and asaf, both of you "israelis" cant be reasoned with because you are both brsinwashed like the rest of the foreign zionists who come from diffirent people and now tell people they are the jewish people while you all look like the respective people you belong to ie russians, ethiopians, yemeni etc. Nobody buys your propaganda lies so dont even bother with your usual bs such as claiming palestine is jordan or you arabs already have enough land and other such illogical statements. You are finished and that is what happens to extremist murderers, liars and thiefs. Your end is near and your leaders know this, they dont have a clue how to get you out of this mess so they choose war as usual but it wont achieve your goals and they know it. Keep dreaming of remaining in the middle east. We lebanon who are the smallest of all arab speaking countires managed to beat you and achieve our goals. You are only good at PR and making yourself look stronger than you are.

Wake up Danny B! There's no such things as 'Arabs'... what you wrote is nonsense. Palestinians aren't 'Arabs' nor Lebanese, Syrians etc... Most Jews from Eastern Europe aren't semites... and have no ancestors in the M.E. only a few Mizrahim have a legitimacy and They are welcome on our lands. so... wake up!

Asaf: ana asif, what you say is just plain propaganda... Nonetheless, Ethiopian jews deserve respect they aren't getting in israel. So much for tolerance. My relatives died in the gulags and they were jews... I hate when people are stigmatized... and given labels.

Thus spoke the Genius! As if anybody counts him to count on him. idiot wmesheh

Fortunately or unfortunately, we are all bound to live side by side in this part of the world, whether we're christians, muslims or jews. Better to it peacefully rather than keep on fighting for anothe 100 years! The problem is that all arab and israeli leaders know it, but no one wants to make concessions, except the palestinians who have already agreed to settle for much less than their original land before the creation of the state of Israel.
Coming back to Sheikh Saad, as we say: "nata2 zakariah!!!" He'd better keep quiet and enjoy his country of origin (KSA) and his country of adoption (France), instead of uttering fluffy words that will melt when they hit our ears.