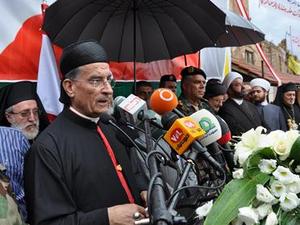 Maronite Patriarch Beshara al-Rahi hoped on Saturday that God would inspire political leaders to take the appropriate decisions that would fall in Lebanon’s favor.

He said from the southern city of Tyre: “We hope they will take political decisions that can ensure the people’s freedom and protect the coexistence between Muslims and Christians in Lebanon and the whole region.”

“We are not idly watching the developments in the Arab world, but we are praying for them and all the people who are seeking to live in dignity and peace,” he added.

He was welcomed in Tyre by Jaafari Muftis Hassan Abdullah and Madrar Habbal, a number of bishops, minister Mohammed Fneish, and MPs Ali Khreis, Abdul Majid Saleh, and Michel Moussa, and a number locals.

Al-Rahi then headed to the southern town of Qana, the second stop of his tour of the South.

Good for you Batrak. Its time for someone to unite all the sects in lebanon under one flag . We all have one ennemie. The jews. I wish my fellow christians would understand that the jews are our ennemies and they caused all the chaos in lebanon. they dont care about all the lebanese people . they want to make lebanon another palestine. Hizballah is not a terrorist group. Its a lebanese party fighting for the rights of all the lebanese. It is time to put our differences aside and unite . just say no to the jews . you will never divide us and the palestinians have the right to go back to their land. We are all proud of our lebanese identity and we will never be refugees. unite unite unite before its too late.

monseigneur rahi , we want a powerful state and LEBANESE coexistence,i am humbly advising u not to play the christian/chia and christian/sunni cards,it will turn against u at the end./
when u visit tripoli saida iqlim el kharroub at the same time, i'll believe u want coexistence......
RELIGION IS CIVIC POISON.

The only poitical decisions that will keep coexistence your Eminence, is the capital punishment for those who have thought to reach power through murder and blackmail!

I wish that Bishop Salim Gazal was still alive to welcome patriarch Al-Rahi to his beloved south of Lebanon. God bless the patriarch.

We congratulate you dear patriarch for your new found friends.
each day you are confirming you became the little general.

neutral,
I'm not sure you realize how ignorant and racist your comment sounds. Shame on you. Your rant should be directed at specific policies and perhaps governments. I can understand a rant towards the Israeli government policies, but to attack "Jews" wholesale? You are no different than an extremist settler in the West Bank who hates all the Arabs, or a skinhead in the US who hates all the Blacks/ Muslims/Jews. For me, I would rather deal with a moderate/liberal Jew than someone that sounds as ignorant as you. Go get some education.

Go to every town and let everyone know the Christians are not afraid. Go Go Go!!!!!!