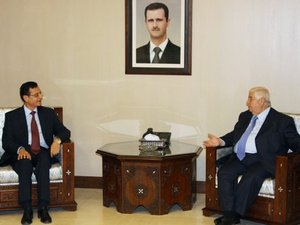 Foreign Minister Adnan Mansour stressed on Saturday that the Syrian regime will surpass the crisis, urging “friends” to support it to implement reforms.

“I am sure that the Syrian leadership will pass the crisis by implementing reforms and the peoples’ demands,” Mansour said after a meeting with his Syrian counterpart Walid al-Muallem in New York.

Al-Muallem, for his part, stressed that “he is relieved for the local situation in general, which is witnessing a slight improvement.”

The gatherers discussed the latest developments in the region, stressing on the importance of “mobilizing an international vote to pressure the United Nations to admit Palestine as a member state.”

Why dont you just shut up mansoor?? you have been telling us for 6 months that it will be "over" or "khilsit" .. the only certain outcome is that people like you mansour are going to be "khlisti" and "over" and it is a matter of time, months or a year, no problem, people are not going back home. Get over it.

when you sleep with the enemy, you become the enemy.